Kids Encyclopedia Facts
Not to be confused with Sighthill, Glasgow. 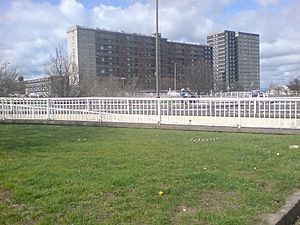 Sighthill is a suburb in the west of Edinburgh, Scotland. Edinburgh College (formerly Stevenson) and Edinburgh Napier University's Sighthill Campuses (formerly Stevenson College and the Edinburgh Business College respectively) are based here. There is also a medical centre, a library and a fire station, as well as some small shops.

The Calder Road, one of the city's main arteries, runs by Sighthill, and the Edinburgh-Glasgow & Stirling railway line is nearby.

The area is bordered by Broomhouse to the east, South Gyle to the north, Bankhead and the Calders to the west and Wester Hailes to the south. It is sometimes included in the Wester Hailes area.

For nearly 50 years, the West Edinburgh skyline was dominated by 4 high rise residential tower blocks (Broomview House, Glenalmond Court, Hermiston Court and Weir Court) the first of which was demolished on 21 September 2008 (Broomview House) with the other three blocks following the same fate just over 3 years later.

All of the remaining tower blocks and low-rise council-built properties have been demolished to make way for new lower level social housing. The 10-story block Broomview House was demolished on Sunday 21 September 2008 by Safedem Ltd. The flats came down at 11:15am in a controlled explosion where a longstanding former resident pushed the ceremonial button to implode the building. The remaining three blocks were demolished on Sunday 25 September 2011, also at 11:15am.

All content from Kiddle encyclopedia articles (including the article images and facts) can be freely used under Attribution-ShareAlike license, unless stated otherwise. Cite this article:
Sighthill, Edinburgh Facts for Kids. Kiddle Encyclopedia.