Skid Hill is a 186 metres high hill of eastern Scotland, the highest of the Garleton Hills. 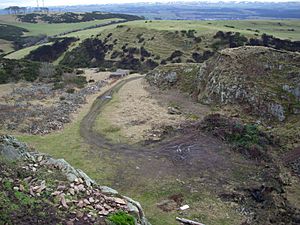 The hill origin is volcanic and it shows both trachitic and basic lavas, recognisable thanks to the excavations connected to the disused quarry opened in its eastern flanks.

A hill fort was detected close to the top of Skid Hill, in one area now located on the northern edge of the disused quarry. 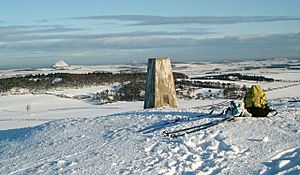 Very close to the actual summit of Skid Hill stands a trig point. It can be easily accessed on foot from a road flanking the hill by a good track running along the South side of the hill and then by cattle tracks on its western side.

All content from Kiddle encyclopedia articles (including the article images and facts) can be freely used under Attribution-ShareAlike license, unless stated otherwise. Cite this article:
Skid Hill Facts for Kids. Kiddle Encyclopedia.