Ropalidia revolutionalis Ropalidia revolutionalis, the small brown paper wasp, is a diurnal social wasp of the family Vespidae. They are known for the distinctive combs they make for their nests, and they are mostly found in Queensland, Australia in the areas of Brisbane and Townsville. They are an independent founding wasp species, and they build new nests each spring. They can be helpful because they control insect pests in gardens. However, if threatened, they will sting humans and cause large amounts of pain.

Ropalidia revolutionalis were first classified by Henri Louis Frédéric de Saussure in 1853. They are part of the Polistine tribe Ropalidiini, which includes paper wasps in the Australasian region, specifically in the Lesser Sunda Islands and the northern regions of Australia. They are also part of the genus Ropalidia, which is the only genus that contains both swarm-founding and independent founding wasp species.

R. revolutionalis are small, dark, reddish brown wasps with body lengths of 8 to 10 mm. When viewed closely, they have remarkable patterns on their bodies, and they have eyes with multiple lenses. They are slightly smaller than species from the family of Polistes. This is because their abdomens have a segment after the waist that is slimmer than the following segment. Although these wasps are not considered especially aggressive, they will sting if their nests are disturbed.

Also known as the Stick-Nest Paper Wasp, the nests of the R. revolutionalis consist of several combs each about 100 mm long with two columns of cells that resemble sticks hanging from a branch. Their nests are usually found on shrubs, hanging baskets, under eaves, or near other sheltered areas. These wasps are found mainly in south-eastern to northern Queensland, Australia.

Ropalidia revolutionalis is an independent-founding wasp species that begins building nests each spring. Each nest is founded by a small association of females that begin by creating a single comb. During this pre-emergence stage, the number of egg-laying females decreases to only one being present in the nest (haplometrosis). However, after the emergence of the first progeny of adults, the females create smaller combs alongside the largest comb, and more potential egg-layers join the colony as the construction progresses (pleometrosis). The progeny join the adults in taking care of the nests. Near the end of summer, the queen produces both male wasps and fertile female wasps. These progeny then mate with wasps from other colonies, and then the females find secure locations in which they can reside during the winter. At this point, the colonies begin to deteriorate, and the females start their own colonies the following spring. 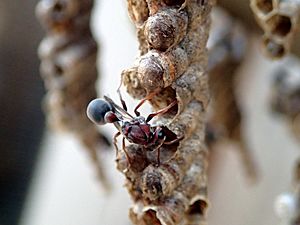 Each colony begins as a single comb constructed by a few females or by one female, and eventually the colony gains smaller satellite combs as the year progresses. Workers create these combs by using pulp and decaying wood which they chew and mix with their saliva. Each comb is made up of two rows of cells attached by a pedicle (stalk) at the upper end. Also, occasionally females reconstruct old nests that partially deteriorated during the winter, which suggests that some colonies last more than one year.

Each larva of the R. revolutionalis is kept in an individual cell in the nest. Each of these cells has a transparent bottom where the workers remove feces from the cell. Foragers return to the nest with caterpillars and other soft bodied insects. Before presenting food to the larvae, they drum their heads on the inside of the cell. Females rear the young into August even as the nest deteriorates, and the larvae eventually pupate and become adult wasps.

During the day, foragers search for flowers and small prey. They bring back soft insects for the larvae and nectar for the adults. When temperatures are high, workers will often raise their abdomens, draw their legs in, and fan their wings rapidly in an effort to cool down the nest. They also continually construct and take care of the cells in the comb.

Females exchange food either by facing each other and engaging in trophallaxis (the transfer of liquid food by putting the mandibles in opposition) or in some cases by mounting another female and bending over her thorax to transfer food. The reproductive females solicit the most frequently.

When other insects approach the nest, the dominant individuals (functional queens) may vibrate their wings or assume a stance of alarm to warn the other females of approaching danger. Females also demonstrate alarm through agitated movement. This is usually demonstrated by contracting and expanding their abdomens or by holding their antennae straight out from their bodies.

Each nest usually contains several larger, dominant (queen-like but not reproducing) females. These females occasionally engage in aggressive acts such as darting around for short intervals or climbing onto the backs of subordinates and chewing or biting. They also tend to occupy the largest comb, while subordinates (those that lack developed eggs) are often forced onto smaller combs or reside on the substrate of the ceiling. Acts of dominance also appear to increase as the colony cycle progresses, so it is possible that some acts of dominance may be performed by the parent-generation on the newly emerging adults.

Ropalidia revolutionalis females almost always mate singly, increasing the amount of relatedness within the colony. Also, there is little to no inbreeding within the colonies. This is because males leave the nest and mate with females from other colonies, and newly fertile females also mate with non-related males before hiding during the winter.

Sometimes eggs laid by subordinate females are eaten by dominant females, but multiple females can still lay eggs after the colony has reached the post-emergence stage. Also, there is usually one primary dominant reproducer, and that producer stays in the nest and sits on capped cells containing pupae.

The dominant reproductive female remains dominant until she dies. After this occurs, the colony goes through a short period of having multiple queens (often daughters of the previous queen). Eventually, one queen becomes dominant again, but the nest still contains a few less dominant queens.

If a member of either sex of R. revolutionalis feels threatened, the wasp assumes a defensive position on the nest. It will warn the intruder to retreat by first lifting and spreading its wings, and then waving its front legs and sometimes shaking its body. If the threat does not go away, the wasp will then fly at and often sting the intruder.

Ropalidia revolutionalis help control pests in gardens by catching caterpillars and other insects for their larvae. If possible, their nests are best left alone. However, if disturbed, they will sting, and their venom contains 5-hydroxytryptamine which can induce large amounts of pain.

All content from Kiddle encyclopedia articles (including the article images and facts) can be freely used under Attribution-ShareAlike license, unless stated otherwise. Cite this article:
Small brown paper wasp Facts for Kids. Kiddle Encyclopedia.