The Smooth Fox Terrier is a breed of dog, one of many terrier breeds. It was the first breed in the fox terrier family to be given official recognition by The Kennel Club (circa 1875; breed standard 1876). It is well known, and although not a widely popular breed today outside hunting and show circles, it is extremely significant due to the large number of terriers believed descended from the breed.

The Smooth Fox Terrier's development as a breed is largely undocumented, but the dog has been known as a distinct breed in England since at least the 18th century; the first documented evidence of the Smooth Fox Terrier came in 1790, when a Colonel Thornton painted a portrait of his dog, Pitch. 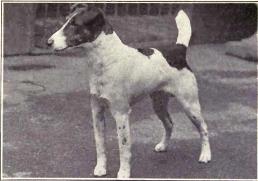 However, the two breeds were considered to be varieties of one breed and were occasionally interbred until the mid-1980s when the AKC changed them from varieties to separate breeds. All modern Smooth Fox Terriers trace back to wires many times, from Eng. Ch Watteau Chorister, through Eng. Ch. Lethal Weapon, Eng. Ch. Corrector of Notts and Eng. Ch. Cromwell Ochre's Legacy back to Dusky D'Orsay. Bred by Mr. Francis Redmond, Dusky D'Orsay's sire was a Wire, Dusky Collar, and her dam a Smooth, Eng. Ch. D'Orsay's Donna. Through Dusky D'Orsay, all modern Smooths trace back to several famous Wires, including Ch. Cackler Of Notts and Meersbrook Bristles.

The Smooth Fox Terrier's historic profession is fox bolting. A fox bolting dog will accompany a pack of foxhounds and "bolt" after foxes, driving them out from their hiding spots and into the line of sight of the larger dogs and men on horses. Smooth Fox Terriers with white coats were less likely to be mistaken for the fox in close combat situations, and were therefore more highly prized.

The Smooth Fox Terrier is a highly energetic dog, and thus not recommended for first time dog owners. As the breed was originally bred to go after small animals they also have a high prey instinct, they are very friendly dogs and don't mind strangers if introduced and exposed to people from a young age. Without appropriate early exposure, however, loud barking may ensue.

The Smooth Fox Terrier generally lives 12 to 15 years, and can live as long as 19 years. The breed is genetically quite healthy. Some known health problems are deafness, luxating patellas and a variety of eye disorders such as lens luxation, distichiasis, and cataracts. Skeletal problems that can occur include Legge-Perthes disease and shoulder dislocations. Myasthenia Gravis and idiopathic epilepsy have also been reported, as well as goiter.

The Smooth Fox Terrier is a low-maintenance dog in terms of grooming. Hair grows all over the entire body equally, so to have the smooth clean look areas must be scissored or clippered. For normal pet maintenance, brushing the coat, keeping the nails trimmed, and cleaning the hair out of the pads of the feet is important. Brushing teeth is also recommended, a dog's bite is very important to its health. Getting your Smooth Fox Terrier used to grooming at an early age is recommended for it will be easier for you the owner to do so throughout your dog's life. Smooth Fox Terriers are known for enjoying the attention that is brought to them while grooming.

All content from Kiddle encyclopedia articles (including the article images and facts) can be freely used under Attribution-ShareAlike license, unless stated otherwise. Cite this article:
Smooth Fox Terrier Facts for Kids. Kiddle Encyclopedia.