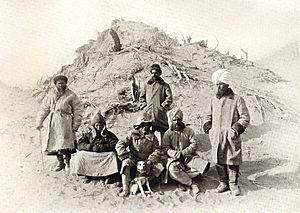 Photograph of Aurel Stein, with his dog and research team, in the Tarim Basin

Sir Mark Aurel Stein or Aurel Stein (1862-1943), FRAS, was a British-Hungarian archaeologist and explorer. He traveled to many parts of South Asia and Central Asia to discover ancient cultures and their remains.

He died and was buried in Kabul, Afghanistan.

All content from Kiddle encyclopedia articles (including the article images and facts) can be freely used under Attribution-ShareAlike license, unless stated otherwise. Cite this article:
Aurel Stein Facts for Kids. Kiddle Encyclopedia.