So You Want to Be a Wizard facts for kids

So You Want to Be a Wizard is the first book in the Young Wizards series currently consisting of eleven books by Diane Duane. It was written in 1982 and published in the next year. In 2012 a revised "New Millennium Edition" was published. The plot follows Nita Callahan, a thirteen-year-old girl who discovers a book titled So You Want to Be a Wizard while hiding from bullies in a library. She brings the book home with her and discovers that it is about the art of wizardry. She does not completely trust the book's claim that she can become a wizard if she takes the Wizard Oath, but she takes it nonetheless. The next day when she is out trying to do her first spell she meets Kit Rodriguez, another wizard. After they successfully complete a spell together, Nita's doubts are gone: she is a wizard.

Nita Callahan, taking refuge in the library from bullies, checks out a book found in the children's section with the provocative title So You Want To Be a Wizard. On the way home, the bullies corner her, beat her up, and take a space pen given to her by her uncle. Before Nita goes to sleep, she takes the Wizard's Oath. The next morning she looks at her manual and sees her name in the wizards list.

She goes to a quiet place to work a pen retrieval spell, and meets Christopher "Kit" Rodriguez, also a new wizard. Kit is making a spell intended to surround him with an aura of fearlessness. Combining their intentions, they create a new spell, which presents a vision of an alternate Manhattan: polluted, lightless, and frightening. A terrible being composed of pure desire reaches up to consume them, and to escape, they open their minds to the universe - which ends up bringing an intelligent white hole from space. Translated into English and simplified, the white hole's name is "Fred".

The next day at school Fred and Nita attempt to retrieve Nita's pen from her bullies, but Fred miscalculates the gravity required to lift the pen from the bullies' possession, and instead accidentally swallows it. This makes Fred hiccup objects, including a television, a blue Mercedes, and a Learjet. After school, they seek help from the local Advisory Wizards. Fred's problem is fixed, but Nita's pen is not recovered. In order to retrieve it, they must link Fred to a worldgate in Grand Central Station and pull the pen out of Fred.

Fred also has some alarming news: a crucial book has gone missing. Called the Naming of Lights, it is a compendium of information that describes the true nature of everything that has or will exist. It is also known as The Book of Night with Moon because it can only be read by moonlight. Its shadow, The Book Which is Not Named, contains descriptions that are twisted out of their true patterns. If the Lone Power - the being of desire and hate sensed by Nita and Kit - were to read the shadow Book without the bright Book being read, the cosmos would be irreparably skewed.

In Grand Central, Nita and Kit find that the worldgate has been knocked out of place and is hovering above the station. Nita invokes the air to solidify into a walkway between the roof of the Pan Am Building and the gate, but before Nita can retrieve her pen, a pack of werewolf-analogues attack, causing Nita, Kit, and Fred to plunge through the worldgate.

On the other side, Nita's pen is lying on the floor of a building in an alternate New York City. The landscape is cold, dark and lifeless, populated by predators. Many resemble automobiles, but there are also glowing-eyed dun mice, batlike skinwings, and dragonlike fireworms. This world belongs to the Lone Power, a thing far worse than any devil and more ancient than the earth.

Nita, Kit, and Fred learn that the two Books are here, and that to get home they will have to read from the bright Book. To find the bright Book, they decide to steal the dark Book from the Lone Power, because they need the Bright Book's power to find the worldgate, which has been hidden in the darkness that the Lone Power has created. On their way to the Lone Power's office, Kit finds a racing car, a Lotus Esprit, beside its prey, a "dead" sedan, injured by a piece of metal lodged in its axle. Kit cuts this piece away, and the Lotus roars off, free.

Inside the building, Nita, Kit, and Fred eavesdrop on the Lone Power's phone call to the Archangel Michael. Michael suspects his brother stole the bright Book, while the Lone Power suspects him of sending Nita and Kit to steal it back. Nita and Kit have not previously considered this, but it begins to make sense. 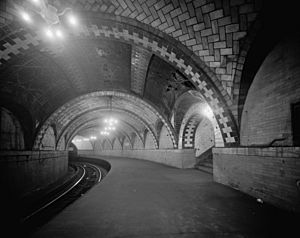 Nita steals the dark Book, and uses it to locate the bright Book in the tunnels under City Hall. Aided by the Lotus Esprit, who has returned to show its gratitude, they proceed to the tunnels, where they discover the Book is guarded by the Eldest of the fireworms. The Eldest - a dragon-like fire-breathing lizard - lies on a vast hoard of stolen gold, gems, silver plate, plastic toys, coins, and bones. The wizards bargain with the Eldest, giving it the dark Book in exchange for the bright Book, in addition to securing the hoard with a magical barrier.

The enraged Lone Power comes after them on the back of an eight-legged, skull-faced beast. They flee through the worldgate, and re-enter their homeworld with the Lone Power on their heels. To stop the Lone Power from destroying their Universe, Kit and Nita quickly enlist a wall of magically animated trees and statues around a refuge in Central Park, and begin to read from the bright Book by moonlight, to undo the changes that the Lone Power has been making during the pursuit.

The Lone Power then puts out the Sun, extinguishing the moonlight that is necessary to read from the Book. Fred sacrifices himself by "blowing his quanta", releasing all his mass as energy in the form of visible light, which, reflected by the moon, becomes moonlight by which the Wizards can continue reading. As Kit and Nita recite the Lone Power's true name, written in the bright Book, Nita makes a slight modification to the text (the symbol ⎋), giving the Lone Power the option to become a positive rather than a negative energy.

Characters in "So You Want to Be a Wizard"

Juanita "Nita" Louise Callahan is one of the protagonists in this story. Nita is a lonely thirteen-year-old and does not have many friends. When she discovers a book about wizardry, her life is completely changed. She becomes friends with Kit Rodriguez, another newly minted wizard. Together they find themselves caught up in their wizard ordeal. Nita is gifted in working with the "living world" in wizardry.

Christopher "Kit" K. Rodriguez is one of the protagonists in this story. He is another wizard and partner to Nita. Small for his age and picked on for his Spanish accent, Kit discovers his wizard's manual in a used book store. Soon after taking his Wizard's Oath he meets up with Nita, and together they are thrown into their ordeal that they must complete to become full wizards. Kit is usually the more mature of the team, despite being younger than Nita. His skill is in working with mechanical objects.

Fred is a white hole that Nita and Kit accidentally bring down to Earth from space when working their first spell together. His full name when translated to English is "Khairelikoblepharehglukumeilichephreidosd'enagouni", but he agreed to go by "Fred" (from the syllable "phreid"). When he accidentally swallows Nita's pen, he gets an unfortunate case of the "hiccups", emitting objects such as televisions and airplanes instead of radiation and particles. Fred accompanies Nita and Kit on their ordeal, giving them useful information such as who the Lone Power is. Near the end of the story, Fred sacrifices himself in order to provide Nita and Kit with moonlight so they may continue reading from the Bright Book to save their lives, along with all the people on Earth.

The Lone Power, also known as "The Lone One" and "Starsnuffer", is the main antagonist in the story. Nita and Kit must defeat him in order to complete their ordeals and become full wizards; if they fail, they will most likely die. The Lone One is one of the Powers That Be, but one who went away from the path of good that was intended for the universe, and instead created death. The "Other Manhattan" is his world. Other names for him, coming from the other books, are the "Kindler of Wildfires" and "Relegate".

So You Want to Be a Wizard has won the "ALA Quick Pick for Reluctant Young Adult Readers" award.

All content from Kiddle encyclopedia articles (including the article images and facts) can be freely used under Attribution-ShareAlike license, unless stated otherwise. Cite this article:
So You Want to Be a Wizard Facts for Kids. Kiddle Encyclopedia.