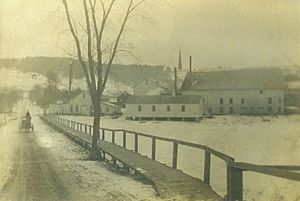 Kraft Foods had operated a cheese plant in South Edmeston starting in the year 1920. They originally produced Philadelphia cream cheese, but then switched over to Breyers yogurt, and the plant employed about 55 workers. In December 2004, Kraft announced that the plant would close on April 8, 2005. Following its closure, the plant was bought by the company Agro Farma, which launched the Chobani brand of Greek yogurt in 2007. Thanks to the surge in popularity of Greek yogurt, as of 2011, the company employs 600 workers at its South Edmeston headquarters and production facility, and continues to expand.

All content from Kiddle encyclopedia articles (including the article images and facts) can be freely used under Attribution-ShareAlike license, unless stated otherwise. Cite this article:
South Edmeston, New York Facts for Kids. Kiddle Encyclopedia.