The South Lake Worth Inlet, also known as the Boynton Inlet, is an artificial cut through a barrier beach connecting the south end of the Lake Worth Lagoon in Palm Beach County, Florida with the Atlantic Ocean. The inlet is 130 feet (40 m) wide and 6 to 12 feet (1.8 to 3.7 m) deep. 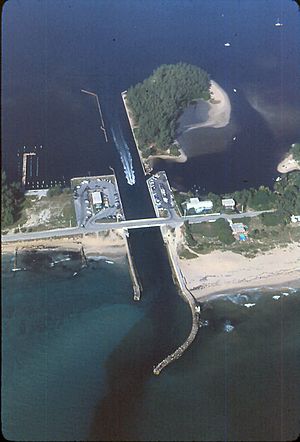 In the mid-19th century Lake Worth Lagoon was a fresh water lake with no connection to the ocean. After the Lake Worth Inlet was cut near the north end of the lagoon in 1866 (with intermittent closures and re-openings until 1886), the lagoon became increasingly brackish. Development around the lagoon polluted it, as well. By 1913 residents of the area were discussing opening another inlet from the south end of the lagoon to help flush polluted waters into the ocean. The State of Florida created a taxing district for the South Lake Worth Inlet in 1915 (the taxing district was abolished in 1996, and Palm Beach County assumed responsibility for maintaining the inlet). Construction of the inlet began in 1925. The new inlet was completed in 1927 at a cost of $225,000, and was 130 feet (40 m) wide and 8 feet (2.4 m) deep (below mean low water).

State Road A1A crosses the inlet on a fixed-span bridge 18 feet (5.5 m) above the water. The depth of the inlet is between 6 feet (1.8 m) and 12 feet (3.7 m). The inlet was never intended for navigation, but is used by recreational boaters. The inlet has a reputation of being dangerous due to shoaling, strong currents and close clearances. There were more than 46,000 boat trips through the inlet in 2006. Seven boats required rescue in the inlet that year.

All content from Kiddle encyclopedia articles (including the article images and facts) can be freely used under Attribution-ShareAlike license, unless stated otherwise. Cite this article:
South Lake Worth Inlet Facts for Kids. Kiddle Encyclopedia.