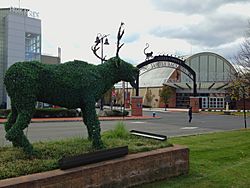 The South Mountain Recreation Complex is a 36-acre recreation facility in Essex County located within the boundaries of the South Mountain Reservation in West Orange, New Jersey, United States. The complex is managed as part of the Essex County Park System. Activities at the complex include a zoo, ice skating/hockey rinks, a safari-theme miniature golf course, a forest adventure park, a restaurant, paddle boats, a nautical theme playground, and a 1.75 miles (2.82 km) walking loop around the Orange Reservoir.

The first phase of the redevelopment was completed in September 2010 with the opening of the golf course.

The second phase of the project was completed in 2011 with the creation of Treetop Adventure, the expansion of the zoo called Big Cat Country Exhibit and the opening of the restaurant. This phase of the project received both praise and criticism. The main critics were some of the 2011 Freeholder candidates and a union organization. The critics objected the use of county tax money on an investment to open a restaurant at the complex and the selection process of the restaurant.

All content from Kiddle encyclopedia articles (including the article images and facts) can be freely used under Attribution-ShareAlike license, unless stated otherwise. Cite this article:
South Mountain Recreation Complex Facts for Kids. Kiddle Encyclopedia.