The South Parade Pier is a pier in Portsmouth, England. It is one of two piers in the city, the other being Clarence Pier. The pier once had a long hall down its centre which housed a seating area and a small restaurant. The outside of the hall is a promenade which runs the length of the pier. Once fallen into disrepair, as of 2017, the pier has been developed into an amusement arcade and food outlet.

The South Parade Pier, in Southsea, part of the English city of Portsmouth, is a pleasure pier offering typical seaside attractions including souvenir shops, ice creams, indoor amusements and a small children's funfair. It also contains a fishing deck and two function rooms which are often used for live music.

The history of the pier has been eventful; like many UK piers. Construction started in 1878 and was officially opened on 26 July 1879. The pier's pavilion was destroyed by fire on 19 July 1904. The pier was then sold to the Portsmouth corporation for £10,782. The pier officially reopened 12 August 1908. In 1914 in an attempt to improve the financial prospects of Seaview Chain Pier the Seaview steam packet company was formed and began running a service between Seaview Chain Pier and South Parade Pier. The service came a halt in September 1914 and was formally prevented from further running by the Admiralty in 1915. 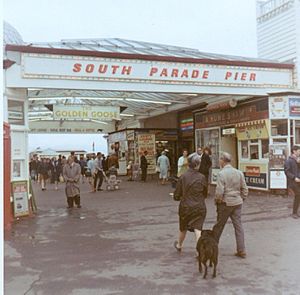 It was partly dismantled during the Second World War in an attempt to hinder any invasion. It caught fire several times, most famously in 1974 during shooting of the film Tommy. In the 1980s the pier's Gaiety and Albert ballrooms were used several times a week for discos organised by Portsmouth Polytechnic students. The pier appeared in an episode of Mr. Bean entitled Mind the Baby, Mr. Bean.

The Pier was sold to three businessmen in 2010, who pledged to restore it to its former glory. The iconic pier is now owned by Frederick Nash, director of Hampshire property firm Matchams South Coast, and partners Tony Marshall, a London lawyer, and Cambridgeshire stud farm proprietor David Moore.

The deck was closed to the general public due to health and safety concerns in April 2012. Limited access was granted to people fishing, but access was withdrawn for all other potential users. At the beginning of November the pier was completely closed and fenced off by Portsmouth City Council as it was a danger to the public. A couple of days later the council reopened the front of the pier, which included part of the arcade and other bits which are on land.

In December 2012, an attempt to sell the pier at auction failed. Parts of the boat deck at the end of South Parade Pier broke off and washed up on Southsea beach after being battered by bad weather on the night of 5 February 2014. Shops that face the South Parade reopened in April 2015. The pier was purchased by South Parade Pier Limited in 2014, who in June 2015 submitted plans to the council to bring the pier back into use as a music venue and as a mooring for boats. By this time, 95% of the structural repair work had been completed, to shortly be followed by building refurbishment.

The Pier was finally repaired and reopened on 14 April 2017 with a refurbished amusement arcade and a cafe. Deep Blue Restaurants opened in the Summer in the former Albert Tavern building. The pier is now run by the South Parade trust which aims to acquire and improve, sustain and develop the property and business of South Parade Pier.

In July 2019, a Funfair named "Kidz Island" was opened on the pier. In November 2019, it was confirmed that Richard Cadell had signed a deal to keep the Funfair on the Pier under a 15-year licence. The final restoration works completed in November 2019 with the opening of a £200,000 rebuilt boat deck, the former being removed in 2014 due to storms.

All content from Kiddle encyclopedia articles (including the article images and facts) can be freely used under Attribution-ShareAlike license, unless stated otherwise. Cite this article:
South Parade Pier Facts for Kids. Kiddle Encyclopedia.