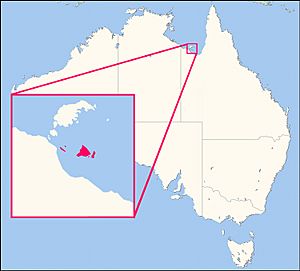 The islands are (west to east):

Kayardild (also known as Kaiadilt and Gayadilta) is a language of the Gulf of Carpentaria. The Kayardild language region includes the landscape within the local government boundaries of the Mornington Shire Council.

Sometime around 1916, a man remembered only as McKenzie came to Bentinck Island and set up a sheep run, basing himself on a site at the mouth of the Kurumnbali estuary. He would ride over the island, accompanied by a pack of dogs, and shoot any Kaiadilt man who came within sight; in local memory, he murdered at least 11 people. He also kidnapped and native girls. He then moved to Sweers Island, and set up a lime kiln there. The Kaiadilt managed to return to Sweers only on McKenzie's departure. The massacre was only recorded by researchers in the 1980s.

Sweers Island was declared an Aboriginal reserve in 1934. After a cyclonic tidal surge swept the area in 1948, which followed fast on the severe drought that struck in 1946, the Kaiadilt were transferred by missionaries and the Queensland Government to Mornington Island. The uprooting effectively set in place the process of the destruction of both Kaiadilt culture and language since all children were restricted to dormitories, away from their parents and kin, and the transmission of the language and lore was lost. On Mornington Island they lived in a separate zone, in beach humpies facing Bentinck Island. They were looked down on by the Indigenous Lardil people, who denied them access to the fishing grounds. Conditions were so severe that for several years all children were stillborn, creating a gap in the generations. From the late 1960s onwards, the Kaiadilt began to return to their own islands.

All content from Kiddle encyclopedia articles (including the article images and facts) can be freely used under Attribution-ShareAlike license, unless stated otherwise. Cite this article:
South Wellesley Islands Facts for Kids. Kiddle Encyclopedia.