The Peninsula College of Medicine and Dentistry, a medical school established by the University of Exeter and Plymouth University which operated between 2000 and 2013, referred to it, as did the South West Peninsula Strategic Health Authority before its 2006 demise. 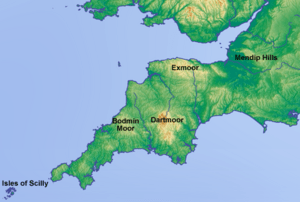 The peninsula, which is the longest in England.

Land's End is the westernmost point of the peninsula and of England. The eastern limit may be defined as the 54.5-kilometre (33.9 mi) isthmus between the mouth of the river Parrett and Lyme Bay.

All content from Kiddle encyclopedia articles (including the article images and facts) can be freely used under Attribution-ShareAlike license, unless stated otherwise. Cite this article:
South West Peninsula Facts for Kids. Kiddle Encyclopedia.