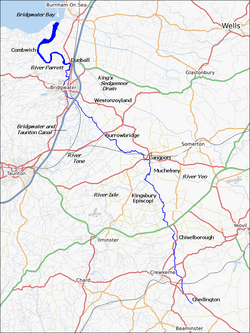 The River Parrett is a major river in Somerset and Dorset, England. It starts in the County of Dorset near Chedington. From here it flows in a northwesterly direction through the Somerset Levels to Bridgewater. It flows into the Bristol Channel close to Burnham-on-Sea. At the mouth of the river is Bridgewater Bay National Nature Reserve. The river is tidal for 18.6 miles (29.9 km) up to the hamlet of Oath, some 10 miles (16 km) south east of Bridgewater. The river has a very slight fall between Langport and Bridgwater, only 1 foot per mile, or 20 cm per km, and is prone to frequent flooding, in winter and high tides.

The River Parrett is 37 miles (60 km) long and its main tributaries include the Rivers Tone, Isle and Yeo. The River Cary drains into the Parrett via the King's Sedgemoor Drain. The River Parrett drains an area of over 1,690 square kilometres (650 sq mi), making up around 50% of the land area of Somerset.

All content from Kiddle encyclopedia articles (including the article images and facts) can be freely used under Attribution-ShareAlike license, unless stated otherwise. Cite this article:
River Parrett Facts for Kids. Kiddle Encyclopedia.