Spahats Creek Falls, also called Spahats Falls, is a waterfall on Spahats Creek within Wells Gray Provincial Park of British Columbia, Canada. Common references place the falls at around 60 m (197 ft) tall, but taking into account the second tier, it is closer to 75–80 meters tall. It is a popular stop for tourists and especially motorcoach tours since it is only 10 km (6.2 mi) off the busy Yellowhead Highway.

Spahats Creek rises from snowmelt and springs at a pass between Raft Mountain and Trophy Mountain. It flows 15 km west before tumbling over Spahats Falls and entering the Clearwater River.

Spahats is the First Nations term for bear and the stream was long known as Bear Creek. When the first accurate topographical map of the Clearwater Valley was published in 1953, it labelled the stream as “Bear Creek” and the falls as “Spahats (Bear) Creek Falls”. By the late 1960s, “Spahats” had become an accepted alternative due to the large number of Bear creeks in British Columbia and was officially adopted.

These impressive natural features used to be protected as tiny Spahats Creek Provincial Park, but in 1997 the boundaries of Wells Gray Provincial Park were expanded south along the Clearwater River and included Spahats. Tourists today see the anomaly of a "Wells Gray Park" entrance sign beside the road just south of Spahats Creek and another, more elaborate, sign 25 km (15.5 mi) further north. Spahats Creek Park used to have its own 20-unit campground with an attractive location deep in an old-growth forest, but in 2006 it was closed and converted into a gigantic parking lot.

Like the larger Helmcken Falls, Spahats Falls owes its formation to deposits of volcanic rock in the Wells Gray-Clearwater volcanic field. Starting about 300,000 years ago, numerous eruptions from Trophy Mountain poured into the Clearwater River Valley and filled it layer upon layer to a depth of over 300 m (980 ft). Eruptions in various parts of this valley continued sporadically for 200,000 years, producing some 25 km3 (6.0 cu mi) of lava and creating Wells Gray Park features such as Murtle Plateau. After the eruptions, the Clearwater River re-established its course and began cutting into the lava. During the Pleistocene, gigantic icefields scraped away at the lava. When all this ice melted, the floods completed the carving of Granite Canyon on the Clearwater River and the side canyon where Spahats Falls occurs. 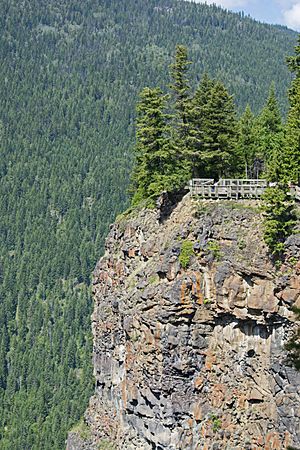 All content from Kiddle encyclopedia articles (including the article images and facts) can be freely used under Attribution-ShareAlike license, unless stated otherwise. Cite this article:
Spahats Creek Falls Facts for Kids. Kiddle Encyclopedia.