Central view of the Speer Neighborhood near Clarkson and Ellsworth.

Speer is the official name for the Denver neighborhood bounded by 7th Avenue (north), Broadway (West), Alameda Avenue (South) and Downing Street (East). The northeast portion northeast of Speer Boulevard is generally referred to as Alamo Placita due to a local park and historic district of this name. 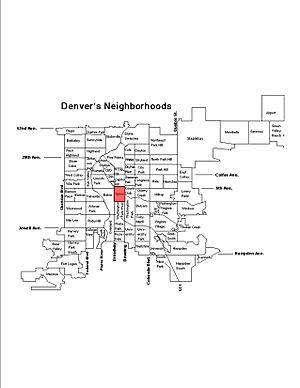 Generally, the neighborhood character is defined by the Capitol Hill neighborhood to the north, which is a highly dense neighborhood dominated by mid- and high-rise multi-family uses and the Washington Park West and Baker neighborhoods, which are to the south and west of Speer and comprised primarily low-rise multi- and single-family residential units. The Speer neighborhood itself contains both multi- and single-family residences, with the majority of commercial buildings found along primary thoroughfares such as Speer Boulevard, East 6th Avenue, Broadway and Alameda Avenue. The area's zoning is essentially complete and is approximately 98% built out, with improvements 30 to 100 years old and ranging from below average to excellent condition. The neighborhood is currently in a revitalization phase.

All content from Kiddle encyclopedia articles (including the article images and facts) can be freely used under Attribution-ShareAlike license, unless stated otherwise. Cite this article:
Speer, Denver Facts for Kids. Kiddle Encyclopedia.