The brewery was established in Dunedin in 1876 by James Speight, Charles Greenslade and William Dawson. In 1880, Speight's won a gold medal at the Melbourne International Exhibition, giving rise to the Speight's Gold Medal Ale brand. By 1887 it has become the largest brewery in New Zealand, and had expanded to a sufficient size that it exported beer to Australia and the Pacific Islands. In 1923, Speight's merged with nine other breweries to form New Zealand Breweries. In 2001, production expanded to the Lion brewery in Newmarket, Auckland. 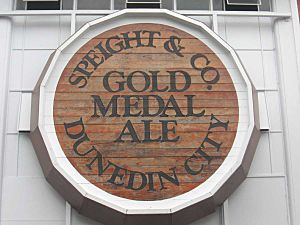 Speight's Gold Medal Ale is the brewery's best known beer. Though marketed as an ale, as it was in the past, it is actually a New Zealand Draught-style lager, brewed using lager yeast and lagering techniques.

In addition to its main Gold Medal Ale brand, Speight's also makes beers under the Speight's Summit and the Speight's Craft ranges of beer, the latter including the Speight's Old Dark, Speight's Distinction Ale, and Speight's Triple Hop Pilsner, all of which are lagers of varying colour.

The Speight's brewery building is a prominent landmark in central Dunedin, located just to the west of The Exchange at the corner of Rattray and Maclaggan Streets and extending up the hill into City Rise.

The earliest parts of the building date back to 1876, with several major extensions and renovations in the years since, most notably extensions in 1938 designed by Harry Mandeno. The most recent renovation was to provide earthquake strengthening in 2012–14.

Regular guided tours of the building are run by the brewery for members of the public.

Speight's label features three eight-pointed stars. These stars come from both the original provincial arms of Otago, and the fact that Speight's was awarded gold medals at brewery awards in three different countries in 1877.

More recently, Speight's Southern man advertising campaign has been popular and long running. Speight's main marketing slogan, "Pride of the South", has been used in association with these advertisements for a number of years. One popular advertisement featured the Cardrona Hotel pub. Speight's later built a loose replica of this building in Mt Eden, Auckland, as part of its national marketing scheme.

At the site of their Dunedin plant the company has installed a tap that pumps water up from a spring deep below the brewery, thus providing fresh, pure water free of charge. This tap was at the centre of an April Fool's joke in 1998 when the Otago Daily Times reported that, just for that day, Speight's beer would flow, free of charge, from that tap.

All content from Kiddle encyclopedia articles (including the article images and facts) can be freely used under Attribution-ShareAlike license, unless stated otherwise. Cite this article:
Speight's Facts for Kids. Kiddle Encyclopedia.