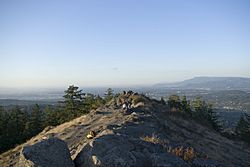 View north across the summit

The butte was called Champ-a te or Cham-o-tee by the native Kalapuya, meaning rattlesnake.

One popular theory is that Spencer Butte was named for a young Englishman of the Hudson's Bay Company named Spencer, who was said to have been killed by the Kalapuya after climbing the hill alone. Another, less popular theory holds that the butte was named after Secretary of War John C. Spencer in July 1845 by Elijah White. Spencer was no longer Secretary of War by 1845, however.

All content from Kiddle encyclopedia articles (including the article images and facts) can be freely used under Attribution-ShareAlike license, unless stated otherwise. Cite this article:
Spencer Butte Facts for Kids. Kiddle Encyclopedia.