Skinner Butte (often erroneously called Skinner's Butte) is a prominent hill on the north edge of downtown Eugene, Oregon, near the Willamette River. A local landmark, it honors city founder Eugene Skinner and is the site of the municipal Skinner Butte Park. During the early 1920s, the city's Ku Klux Klan members etched the letters "KKK" into the side of the butte and installed a cross near the top. Local Klan members were said to have burned the cross during meetings. The letters were removed and replaced with the letter "O" in the late 1920s. The cross was replaced several times since the Klan first erected it. However, the cross wasn't permanently removed until 1997.

The view of downtown Eugene
from the top of Skinner Butte
See also: Big "O"

The elevation at the top of Skinner Butte is 682 feet (208 m) above sea level, approximately 200 feet (60 m) above the surrounding city. A winding road leads to the summit, which provides a comprehensive view of the city. The public park features hiking trails and open lawns.

The butte is also the location of a giant "O" emblem (representing the University of Oregon) visible from the air and the city. Less visible is the "Big E" for Eugene High School (renamed South Eugene High School in 1957). These emblems were erected in the early 20th century.

The "O" was formerly lit prior to the Civil War football game against Oregon State. In 2010, the Big "O" was added to the National Register of Historic Places. A small reservoir sits on public land on the east flank of the butte below the summit. 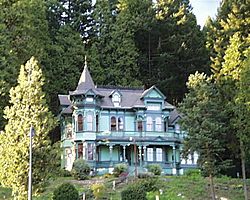 The butte was known as "Ya-Po-Ah" in the language of the Kalapuya, who inhabited the Willamette Valley prior to the arrival of Euro-American settlers in the 19th century. In 1846, Eugene Skinner, an American settler who had arrived in the valley after traveling overland to California, erected a cabin on the butte on the advice of the Kalupuya, who warned him about floods on the Willamette. Skinner's cabin became the basis for his Donation Land Claim. The site of the cabin is commemorated today by a marker on the hillside. A replica of the cabin has been located in various places in the park over the years.

Skinner Butte Park was dedicated in 1914. According to the Register-Guard, "at one point, the park...included a car camp, a zoo and, during the Depression, a Civilian Conservation Corps regional camp."

The park is a popular site for rockclimbing (on "The Columns" the site of a former basalt quarry on the west side of the butte that operated from the 1890s through the 1930s) and birding, among other recreational activities. In July 2006, the City of Eugene opened a new playground, RiverPlay Discovery Village Playground, in the park.

The butte is also the site of the Shelton-McMurphey-Johnson House, a Queen Anne Victorian residence built-in 1880 by a family that once owned the entire butte. Before trees grew up and obscured it, the house was known as the "Castle on the Hill". It was added to the National Register of Historic Places in 1984. The name "Ya-Po-Ah" lives on in "Ya-Po-Ah Terrace", a controversial high-rise retirement home built at the foot of the butte in 1968. 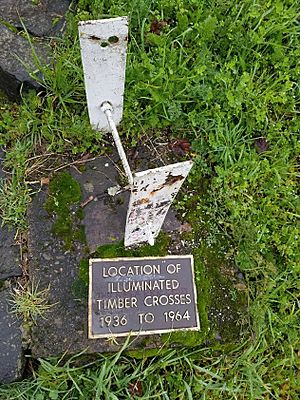 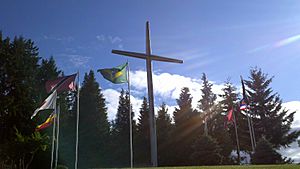 All content from Kiddle encyclopedia articles (including the article images and facts) can be freely used under Attribution-ShareAlike license, unless stated otherwise. Cite this article:
Skinner Butte Facts for Kids. Kiddle Encyclopedia.