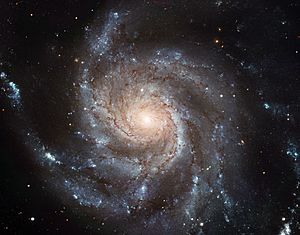 A famous spiral galaxy, the Pinwheel Galaxy (also known as Messier 101 or NGC 5457) 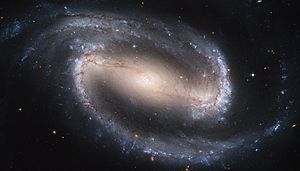 A spiral galaxy is a kind of galaxy that looks like a flat, slowly rotating disk with a bulge in the centre, and spiral patterns extending outward from the bulge. It contains stars, gas, dust, dark matter and a supermassive black hole at its centre.

Galaxies were long thought to be nebulas. The spiral nebula as a type was first described by Edwin Hubble in his 1936 work The Realm of the Nebulae. They are now listed as galaxies, and are named after their shape.

About 60% of galaxies in the universe near us (the 'local universe') are spiral and irregular galaxies. They are mostly found in low-density parts of the universe, and are rare in the centers of galaxy clusters.

All content from Kiddle encyclopedia articles (including the article images and facts) can be freely used under Attribution-ShareAlike license, unless stated otherwise. Cite this article:
Spiral galaxy Facts for Kids. Kiddle Encyclopedia.