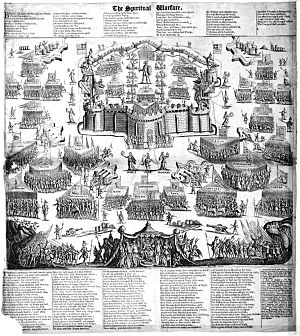 The Spiritual Warfare (c1623), a print by Martin Droeshout depicting the devil's army besieging a walled city held by a "Christian Soldier bold" guarded by figures representing the Christian virtues. It has been suggested that this print may have influenced John Bunyan to write The Holy War.

Spiritual warfare is a Christian belief of fighting against bad supernatural forces (demons). The existence of bad spirits which can affect humans is the main idea for this belief system. Many Christian groups have used ideas of this movement to hold back these bad forces. These ideas mainly come from Christian demonology. A way to fight these forces is by using prayer. Exorcisms (removing demons), laying-on of hands, fasting, or anointing with oil are also used.

Some well known people, such as Bill Ellis, Elliot Miller (Christian Research Institute), and Gretchen Passantino have claimed that ideas in spiritual warfare are based off of Christian stories that are not from the Bible. These stories are not considered true by Christians who believe that only the Bible is fact.

All content from Kiddle encyclopedia articles (including the article images and facts) can be freely used under Attribution-ShareAlike license, unless stated otherwise. Cite this article:
Spiritual warfare Facts for Kids. Kiddle Encyclopedia.