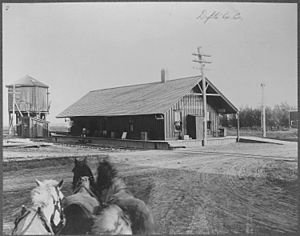 Spiritwood is a census-designated place (CDP) in eastern Stutsman County, North Dakota, United States. An unincorporated community, it was designated as part of the U.S. Census Bureau's Participant Statistical Areas Program on March 31, 2010. It was not counted separately during the 2000 census, but was included in the 2010 census, where a population of 18 was reported.

It lies east of the city of Jamestown, the county seat of Stutsman County. Although it is unincorporated community, it has a post office, with the ZIP code 58481.

All content from Kiddle encyclopedia articles (including the article images and facts) can be freely used under Attribution-ShareAlike license, unless stated otherwise. Cite this article:
Spiritwood, North Dakota Facts for Kids. Kiddle Encyclopedia.