In 1871, a Northern Pacific Railroad work crew set up camp where the railroad would cross the James River, adding another section to the new northern transcontinental line. In 1872, the U.S. Army established Fort Seward, a small post garrisoned by three companies (about 120 men) of the Twentieth Infantry Regiment, on a bluff overlooking the confluence of the James River and Pipestem Creek. The fort guarded the crossing of the James by the Northern Pacific Railroad. The fort only lasted five years, being decommissioned in 1877 - but the railroad remained, establishing a repair yard that was among the city's main industries until the 1960s.

Jamestown was founded in 1872 and General Thomas Rosser of Northern Pacific named it after Jamestown, Virginia. The city incorporated in 1883. In 1873, Stutsman County became the first official county within Dakota Territory with Jamestown as the county seat. 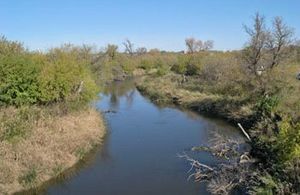 The James River, a Missouri River tributary, in Jamestown

There were 6,567 households of which 24.8% had children under the age of 18 living with them, 41.3% were married couples living together, 8.7% had a female householder with no husband present, 4.1% had a male householder with no wife present, and 45.9% were non-families. 39.4% of all households were made up of individuals and 16.1% had someone living alone who was 65 years of age or older. The average household size was 2.09 and the average family size was 2.78.

In October, 2016 the North Dakota Housing Finance Agency projected that Jamestown would lose 2.1% of its population by the next census. It also reported that it projected a 4% population drop in the nine counties surrounding Jamestown and is considered Jamestowns primary trade area.

There were 6,505 households out of which 27.3% had children under the age of 18 living with them, 46.8% were married couples living together, 8.8% had a female householder with no husband present, and 41.6% were non-families. 37.0% of all households were made up of individuals and 16.2% had someone living alone who was 65 years of age or older. The average household size was 2.17 and the average family size was 2.85. 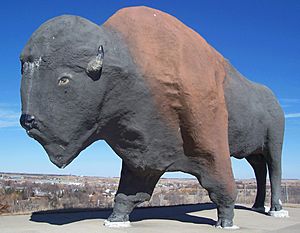 Jamestown Reservoir, a series of three, interlocking, 12-mile-long artificial lakes formed by Jamestown Dam, a flood control a dam on the James River at the north end of the city, is home to watersports and recreational fishing. Jamestown is home to two 18-hole golf courses—Hillcrest Golf Course and Jamestown Country Club—as well as the Jamestown Civic Center, which hosts concerts, University of Jamestown basketball games, other large events, and the North Dakota Sports Hall of Fame; other sporting facilities include Jack Brown Stadium, one of North Dakota's historic baseball parks. Jamestown is also home to two disc golf courses, an 18-hole recreational course in Klaus Park, and a 27-hole championship course on the island and surrounding land in the Jamestown Reservoir. The Island Course was the site of the 8th Annual North Dakota Disc Golf Championships in 2007.

The city of Jamestown is also home to The Jamestown Arts Center ([1]), located in the heart of downtown. The Arts Center is home to a year-round exhibition gallery, community theater stage, a venue for visual arts performances, art workshops and classes, ceramics studio and a beautiful green space known as The Art Park. Jamestown also features the World's Largest Buffalo, a 26-ft tall sculpture of an American bison.

All content from Kiddle encyclopedia articles (including the article images and facts) can be freely used under Attribution-ShareAlike license, unless stated otherwise. Cite this article:
Jamestown, North Dakota Facts for Kids. Kiddle Encyclopedia.