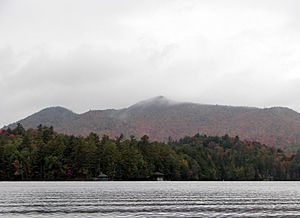 Spitfire Lake is a part of the St. Regis River in the Adirondacks in northern New York State and is 250-acre (1.0 km2) in area. Along with Upper and Lower St. Regis Lake, it became famous in the late 19th century as a summer playground of America's power elite, drawn to the area by its scenic beauty and by the rustic charms of Paul Smith's Hotel. It is the site of many grand old summer "cottages" and Great Camps; Frederick W. Vanderbilt, Anson Phelps Stokes and Whitelaw Reid were among the summer residents. "The camps of many of these families began as tent colonies, with separate units for sleeping, dining, games, and so on, and evolved into permanent structures built with understated taste."

All content from Kiddle encyclopedia articles (including the article images and facts) can be freely used under Attribution-ShareAlike license, unless stated otherwise. Cite this article:
Spitfire Lake Facts for Kids. Kiddle Encyclopedia.