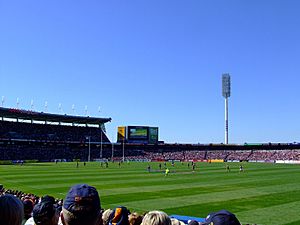 Sports play an important role in the business, community, social and cultural life throughout Australia. Participation and success in high performance sport and regular health and fitness opportunities in community and grassroots sports are an important part of an active, healthy life for men, women and children across South Australia (SA).

South Australia has produced successful Olympians, Paralympians, Commonwealth Games representatives, World Champions and National Champions across a wide range of individual and team sports. Regional and rural opportunities to participate in sport plays an important role in community life throughout SA. SA has developed a range of programs in supporting inclusive sports pathways focusing on specific populations groups such as indigenous, mature-aged, early childhood, people with disabilities and women.

Sport as entertainment plays an important role with South Australia having the second highest rate of event attendance of all states and territories with 49% of South Australians aged 15 years and over attending a sporting event each year.

Significant sporting events in South Australia include the Tour Down Under, Clipsal 500, Adelaide Cup, International Cricket series and hosting various Australian Swimming Championships. Major events have been shown to bring significant economic benefit to the state.

Research shows two thirds of South Australians are involved in sport or recreation with around forty percent of those involved, participating in organised sporting activities. Significantly people from regional areas are more likely to participate through a club based structure and are more likely to volunteer and to be a spectator than those in the Adelaide metropolitan area. It is estimated regional communities have an estimated one third of adults participating in exercise recreation and sport via a club or association and almost a quarter are involved as a coach, official, umpire or administrator.

Research shows Walking, Running, Swimming, Aerobics/Fitness, Golf, Lawn Bowls, Weigh Training and Cycling to be the most popular sports with strong participation by both men and women in South Australia. Historically not all sports have been available to women but that has changed with equal opportunity laws targeting discrimination based on gender.

Differences in participation rates by men and women relate to the Football codes and Netball, which have in the past been limited by opportunities for participation by genders not traditionally associated with the sport.

South Australia has a diverse and rich sporting history with incredible successes at national and international level by its sports men and women. The establishment of the South Australian Sports Institute in 1982 played a role in supporting individuals and team sports in reaching their goals. Currently it has high performance programs for Rowing, Paralympic, Netball, Canoe Sprint, Swimming, Cycling, Trampoline, Diving, Volleyball, Hockey and Waterpolo and conducts Talent search activities throughout the state.

Golf is a popular sport across South Australia. The state has produced successful professional golfers including Jane Crafter and Tamie Durdin.

All content from Kiddle encyclopedia articles (including the article images and facts) can be freely used under Attribution-ShareAlike license, unless stated otherwise. Cite this article:
Sport in South Australia Facts for Kids. Kiddle Encyclopedia.