Sports in Memphis, Tennessee are supported in the city by Memphis Park Services, which offers a wide range of public facilities, including 17 swimming pools, 8 public golf courses, 48 athletic fields hosting a range of 510 youth and 269 adult teams, 130 basketball courts (101 outdoor and 29 indoor), 7 tennis centers and a soccer complex. 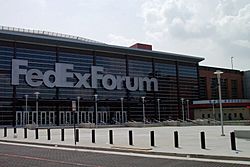 The FedEx Forum, home of the Memphis Grizzlies and the University of Memphis Tigers basketball teams.

Memphis is also home to Memphis Motorsports Park, just north of the city on the outskirts of Memphis and Millington, TN. The venue has a 3/4-mile (1207 m) paved oval track that annually hosts 2 NASCAR-sanctioned events, a Busch-series race (the Sam's Town 250) and a Craftsman Truck series race (the O'Reilly 200). It also has a 1/4-mile (402 m) drag strip that annually hosts the NHRA POWERade O'Reilly Mid-South Nationals, as well as locally sanctioned events that run from February to November. Another racetrack in the Memphis metro area is Riverside International Speedway in West Memphis, Arkansas. It is a 1/4 mile track that midget, sprint and stock-car races happen.

Memphis has an active presence in the derby world courtesy of Memphis Roller Derby. The team is a sanctioned member of the Women's Flat Track Derby Association and competes in the South Central Region. The Memphis league has four home teams that compete in intra-league bouts, plus one travel team that competes in other cities.

All content from Kiddle encyclopedia articles (including the article images and facts) can be freely used under Attribution-ShareAlike license, unless stated otherwise. Cite this article:
Sports in Memphis, Tennessee Facts for Kids. Kiddle Encyclopedia.