Sprengelia incarnata, commonly referred to as the pink swamp-heath, is a flowering plant species of the family Ericaceae. Sprengelia is a small genus containing only four species, all of which are endemic to Eastern Australia.S. incarnata was first formally described by English botanist James Edward Smith in 1974. The genus Sprengelia was named after the German botanist and teacher Christian Konrad Sprengel (1750-1816), while incarnata is derived from the Latin word incarnatus, referring to the flesh-coloured flowers of the plant. 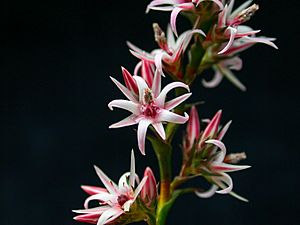 Sprengelia incarnata is an erect, sparingly branched, spindly and glabrous shrub, which can vary from 50–200 cm in height. It has smooth stems which appear as a reddish-brown colour on younger stems, darkening to a grey-brown as the stems age. The leaves are ovate to lanceolate, tapering to a 0.4-0.6mm mucro. They range from 5-20mm long and 2-6mm wide, wrapping around the stem and overlapping one another to form a sheath. Leaves are persistent, but will eventually fall from the older stems, exposing a smooth stem. The flowers are star-shaped, pale pink in colour and form in elongated clusters of three to twenty at the ends of the branches. S. incarnata may flower throughout the year; however, Spring and Summer is the most common time of florescence. There are some species which have similar appearances to S. incarnata which it may be mistaken for. The most common of these are Richea sprengelioides and Richea procera, which have very similar growth habits of the leaves and flowers to S. incarnata. The best way to tell these species apart is by inspecting the stems, which contain rough rings on the Richea species, but remain smooth on S. incarnata. This is caused by the older leaves of the Richea species leaving leaf scars as they die and fall off. 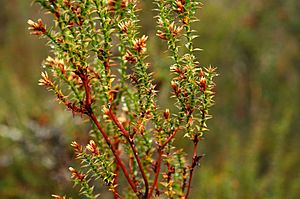 Native to Australia and New Zealand, Sprengelia incarnata can be found growing in the wet swamps and heathlands in many of Australia’s south-eastern regions, and a select few areas of New Zealand. While common in eastern Australia and found across New South Wales, Victoria, South Australia and Tasmania, it is considered at high risk and naturally uncommon in New Zealand, only found in the Fiordland National Park and on Resolution Island. In Tasmania, S. incarnata is a very widespread and abundant shrub, found in almost all wet and peaty landscapes, ranging from sea level to the highest mountains. 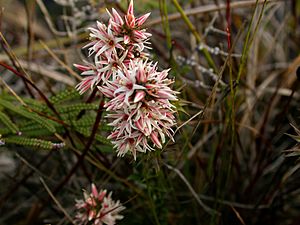 All content from Kiddle encyclopedia articles (including the article images and facts) can be freely used under Attribution-ShareAlike license, unless stated otherwise. Cite this article:
Sprengelia incarnata Facts for Kids. Kiddle Encyclopedia.