A 28cm (11 inch) spurtle, with decorated end resembling a Scottish thistle
This page is about the traditional Scottish porridge-stirring tool. For the similarly-pronounced formation in the Argentine Islands of Antarctica's Ross Peninsula, see Spirtle Rock.

The spurtle (or "spurtel", "spurtil", "spirtle" or "spartle") is a wooden Scottish kitchen tool, dating from the fifteenth century, that is used to stir porridge, soups, stews and broths.

The rod-like shape means that porridge can be stirred without congealing and forming lumps, unlike a spoon that would have a dragging effect during stirring, and the low surface area reduces the chances of porridge sticking to the instrument.

Spurtles are made from wood, including beech, cherry wood, and maple. They come in a range of sizes. Traditional spurtles have stylized thistles at the top, while modern ones often have a smooth taper.

The custom is that a spurtle should be used to stir in a clockwise direction with the right hand.

Old Scots spurtell is recorded from 1528. There was a Northern English dialect word spartle, for stirrer. The modern West Germanic and North Germanic languages, as well as Middle English, also have spurtle cognates which refer to a flat-bladed tool or utensil – so more akin to the couthie spurtle (see below) in shape. Latin spatula, as used in medicine and pharmacy, is their shared ancestor. Spatula is a diminutive of Latin spatha, a broad, flat tool or weapon, which in turn is from Ancient Greek σπαθη ("spathe"), the broad, flat tool used in weaving, or a paddle. The artificial and speculative Proto-Indo-European (PIE) language hypothesises *spe-dh- for spade and its root *spe- for a long, flat piece of wood as the ultimate source of σπαθη. According to this theory, spade and spoon are also claimed to be derived from the same hypothetical PIE *spe- and would be distant cousins of spurtle, if true.

Early spurtles were flat, wooden or metal instruments, with long handles and flat blades. The spatula-like utensils, known as 'Couthie Spurtles,' can be used for flipping oatcakes or making pancakes - but not for making porridge. 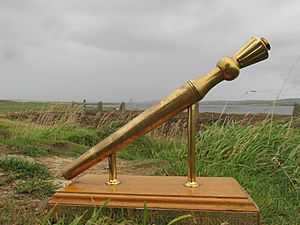 The World Porridge Making Championship awards a "Golden Spurtle" as its main prize.

All content from Kiddle encyclopedia articles (including the article images and facts) can be freely used under Attribution-ShareAlike license, unless stated otherwise. Cite this article:
Spurtle Facts for Kids. Kiddle Encyclopedia.