St. Ann's Cathedral is a Catholic cathedral in Great Falls, Montana, United States. Along with St. Patrick's Co-Cathedral in Billings, Montana it is the seat of the Diocese of Great Falls-Billings. In 1991 it was included as a contributing property in the Great Falls Northside Residential Historic District on the National Register of Historic Places. 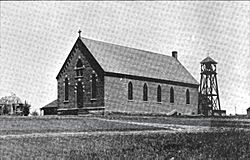 The cathedral and neighborhood in 1920.

The first St. Ann's Church was financed by three parishioners who signed a note for $3,000. The church was built of brick on the site now occupied by the Heisey Center. The first resident pastor was Father Dols who was also responsible for parishes in Cascade, Choteau, and Neihart.

On May 18, 1904, St. Pius X established the Diocese of Great Falls and St. Ann's became the cathedral. One of the first tasks of the new bishop, Mathias Clement Lenihan, was to build a new cathedral to accommodate the growing congregation. Designed by John H. Kent of Helena, the present church was constructed between 1906 and 1907 for around $100,000 ($2,300,000 in 2018 dollars). It features a cruciform plan, gothic arched windows and a turreted bell tower. The stone for the Gothic Revival structure was quarried near Stockett. It is Great Falls' largest church. The former church building was remodeled for a parochial school.

The current rectory was built in 1931 and designed in a style similar to the cathedral. The old church was demolished and the Heisey Youth Center built on the site in 1936. It is also used as a parish center. The cathedral was extensively renovated in 1953 in anticipation of the diocese's Golden Jubilee the following year.

Pope John Paul II renamed the Great Falls Diocese as the Diocese of Great Falls-Billings on February 14, 1980. At that time, St. Patrick's Church in Billings joined St. Ann's as co-cathedral of the diocese.

All content from Kiddle encyclopedia articles (including the article images and facts) can be freely used under Attribution-ShareAlike license, unless stated otherwise. Cite this article:
St. Ann's Cathedral (Great Falls, Montana) Facts for Kids. Kiddle Encyclopedia.