St. Augustine's Catholic Church is a historic Gothic Revival-style Roman Catholic church building located on North Hanover Street in Minster, Ohio, United States. Located in the region of western Ohio known as the "Land of the Cross-Tipped Churches," the church was built in 1848. In 1874, the building was modified with the construction of twin Gothic spires designed by Anton Goehr.

Beginning in the middle of the nineteenth century, St. Augustine was one of the three mother churches for the Society of the Precious Blood that served the Catholics of the region; it kept this position until the end of the century, and it is the only one of the three yet remaining. While many other churches in the region were built in the middle of the nineteenth century, few remain today, and only St. Augustine and St. John's to the northeast are yet used as parish churches.

On July 26, 1979, the building was added to the National Register of Historic Places as part of the "Cross-Tipped Churches of Ohio" multiple property submission. Today, St. Augustine's and St. Joseph's Church in nearby Egypt constitute the Minster Cluster of the Archdiocese of Cincinnati. 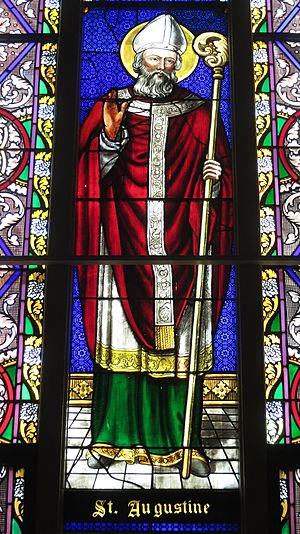 The church interior is adorned with stained windows depicting Christ and saints.

Subjects of the pictorial windows 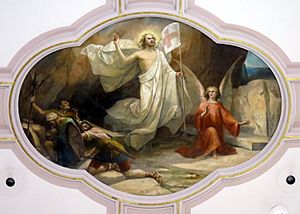 Ceiling fresco of the Resurrection of Jesus

The church ceiling is decorated with frescos depicting the life of Christ and a scene in Heaven.

Subjects of the ceiling frescos

All content from Kiddle encyclopedia articles (including the article images and facts) can be freely used under Attribution-ShareAlike license, unless stated otherwise. Cite this article:
St. Augustine's Catholic Church (Minster, Ohio) Facts for Kids. Kiddle Encyclopedia.