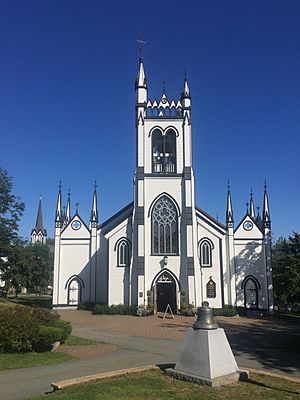 St. John's Anglican Church was the first church established in Lunenburg, Nova Scotia, Canada (1754). It is the second Church of England built in Nova Scotia, and is the second oldest remaining Protestant church in present-day Canada. Early on 1 November 2001, St. John's church suffered significant damage by fire. It was restored and re-dedicated June 12, 2005.

The congregation was mainly Lutheran Germans. The first missionary was sent by the Society for the Propagation of the Gospel was the Rev. Jean-Baptiste Moreau (clergyman) (who is buried in the crypt below the church). Dettlieb Christopher Jessen donated a church bell that is displayed on the church grounds. (Jessen had the bell made by the Whitechapel Bell Foundry in London, the same company that made Big Ben and the Liberty Bell.) Jessen also donated the silver Chalice to the church (1814). Bells in the tower were given by Lt. Col. Charles Edwin Kaulbach (1902). Rev. Roger Aitken established the rectory for the church on Townsend Street (c.1824).

The stone monument to John Creighton Sr. in the church was created by John Bacon (1777–1859), a nineteenth century sculptor. He created six monuments in St. Paul's Cathedral and many in Westminster Abbey. 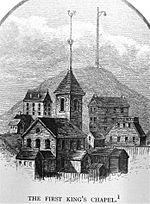 St. John's Church was built during the French and Indian War, using the wood salvaged from an older disassembled church building. When King's Chapel in Boston, Massachusetts, was expanded, its new stone structure was built around its original wooden church, which continued to be used. Then, when that new stone building was completed in 1754, King's Chapel's old wooden frame was disassembled from inside, removed through the new building's windows, and shipped to Lunenburg. Early on 1 November 2001, St. John's church suffered significant damage by fire. It was restored and re-dedicated June 12, 2005. During reconstruction a mystery emerged concerning numerous stars painted within the Church, and which subsequently garnered the interest of international media and astronomers, as the remarkable star scene may convey the night-sky on the first Christmas (some 2 millennia ago) as seen from Lunenburg.

In 2005, the church contributed wood from a salvaged pew to the Six String Nation project. Parts of that material serve multiple functions within Voyageur, the guitar at the heart of the project, including a back brace, a reinforcing strip and kerfing, all on the interior of the instrument. 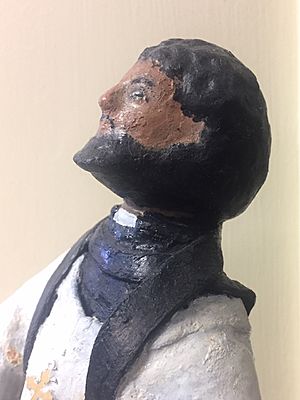 There are 18 people buried in the crypt. 7 people are under age 17. The notable interments include: 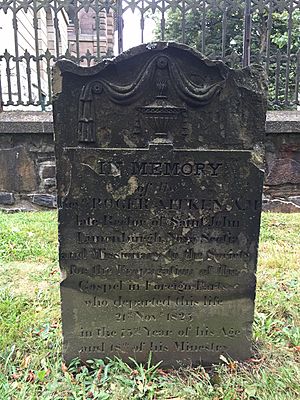 All content from Kiddle encyclopedia articles (including the article images and facts) can be freely used under Attribution-ShareAlike license, unless stated otherwise. Cite this article:
St. John's Anglican Church (Lunenburg) Facts for Kids. Kiddle Encyclopedia.