The Old Burying Ground (also known as St. Paul's Church Cemetery) is a historic cemetery in Halifax, Nova Scotia, Canada. It is located at the intersection of Barrington Street and Spring Garden Road in Downtown Halifax. 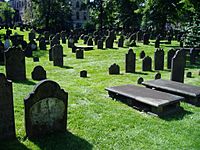 The Old Burying Ground was founded in 1749, the same year as the settlement, as the town's first burial ground. It was originally non-denominational and for several decades was the only burial place for all Haligonians. (The burial ground was also used by St. Matthew's United Church). In 1793 it was turned over to the Anglican St. Paul's Church. The cemetery was closed in 1844 and the Camp Hill Cemetery established for subsequent burials. The site steadily declined until the 1980s when it was restored and refurbished by the Old Burying Ground Foundation, which now maintains the site and employ tour guides to interpret the site in the summer. Ongoing restoration of the rare 18th-century grave markers continues.

Over the decades some 12,000 people were interred in the Old Burial Ground. Today there are about 1,200 headstones, some having been lost and many others being buried with no headstone. Many notable residents are buried in the cemetery, including British Major General Robert Ross, who led the successful Washington Raid of 1814 and burned the White House before being killed in battle at Baltimore a few days later.

Commanders of three of the ships that served Governor Edward Cornwallis buried crew in unmarked graves: HMS Sphynx (1 crew), HMS Baltimore (1 crew) and HMS Albany (6 crew). HMS Sphynx was Cornwallis' own ship and the crew member was buried on the day his ship arrived in Halifax on 21 June 1749. HMS Albany was a 14-gun sloop commanded by Nova Scotia's senior naval officer, John Rous (1749–1753).

There are four recorded Mi'kmaq buried in the burial ground, including a Mi'kmaw Chief Francis [Muir?]. There was also a "protestant indian" named John Tray, possibly from John Gorham's rangers.

There are also 167 recorded Blacks buried in the graveyard, all with unmarked graves. (There is a grave marker, however, of the Huntingdonian Missionary who taught at the first school for Black students in Halifax, Reverend William Furmage.) Blacks arrived with New England Planters. During the arrival of the Planters, there were 54 Blacks in Halifax. 7 Blacks were buried in the cemetery from 1763 to 1775. Black Nova Scotians also arrived in Halifax with Boston Loyalists after the evacuation of Boston in 1776. During this period, 18 Blacks were buried in the cemetery (1776–1782). Seventy-three free Black Nova Scotians (and no slaves) also arrived in Halifax with the New York Loyalists after evacuation from New York in 1783. Of the 73 Blacks who arrived from New York, there were 4 burials that happened during this time period. Rev. John Breynton reported that in 1783 he baptized 40 Blacks and buried many because of disease. Between the years 1792–1817 there are no recorded burials of Black Nova Scotians. The largest number of burials happen in the 1820s (72 graves), presumably the graves of the 155 Black Refugees who arrived in Halifax during the War of 1812.

The last erected and most prominent burial marker is the Welsford-Parker Monument, a Triumphal arch standing at the entrance to the cemetery commemorating British victory in the Crimean War. This is the first public monument built in Nova Scotia and is the fourth oldest war monument in Canada. It is also the only monument to the Crimean War in North America. The arch was built in 1860, 16 years after the cemetery had officially closed. The arch was built by George Lang and is named after two Haligonians, Major Augustus Frederick Welsford and Captain William Buck Carthew Augustus Parker. Both Nova Scotians died in the Battle of the Great Redan during the Siege of Sevastopol (1854–1855). This monument was the last grave marker in the cemetery.

In 1938, the Grand Lodge of Massachusetts presented and dedicated a granite monument to Erasmus James Philipps, who is the earliest known settler of Nova Scotia (c. 1721) who was buried in the cemetery. He was also the founder of Freemasonry in present-day Canada (1737).

The Old Burying Ground was designated a National Historic Site of Canada in 1991. It had earlier been designated a Provincially Registered Property in 1988 under Nova Scotia's Heritage Property Act.

Many of those who first established Halifax arrived from Cape Breton, which the British of New England occupied since their Siege of Louisbourg (1745). The following participated in the Siege:

The following were Loyalist refugees who settled in Halifax after they were banished from New York and Massachusetts. While most Loyalist came to the region from New York (over 66%), most of the Loyalists buried with grave markers are from Boston. Reflective of the fate of many of the Loyalists, the grave of Edward Winslow (scholar) is inscribed: "his fortune suffered shipwreck in the storm of civil war." Part of the devastation of the war resulted from American family members having to choose sides. For example, the story of one American patriot listed below, Benjamin Kent. While in Boston he imprisoned his son-in-law Sampson Salter Blowers for being a Loyalist. Blowers and the rest of Kent's family (including his wife) escaped to Halifax (1776). After the war, Kent eventually moved to Halifax to be with his family, which included Chief Justice Blowers (1885). Both Blowers and Kent are buried in the Old Burying Ground.

During the French Revolutionary Wars, Prince Edward was stationed in Halifax and personally commemorated four military personnel who died while on duty in Halifax. 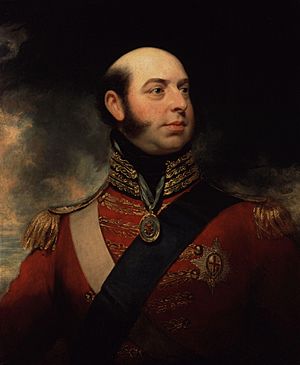 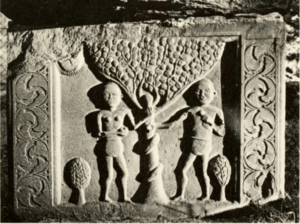 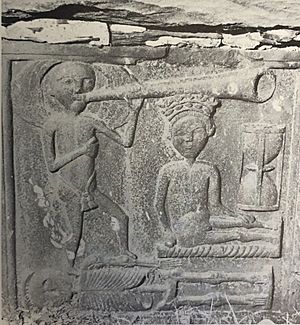 There are various gravestones by stone carvers from London and the local region. Museum curator Deborah Trask asserts that one of the first stone sculptors, James Hay (1750–1842), likely made the gravestone of Richard Bulkeley's wife Mary. On one side Hay carved the angel Gabriel trumpeting, symbolic of the resurrection. The religious text: "In a moment, in a twinkling of an eye at the last trump; for the trumpet shall sound, and the dead shall be raised incorruptible, and we shall be changed" (1 Cor. 15:52). (The trumpeting motive is also on the gravestone of the Lawson children). On the opposite side of the gravestone is an image in the garden of Eden. The religious text: "For as in Adam all die, even so in Christ shall all be made alive." (1 Corinthians 15:22). The image is taken from "The Child's Guide" (London, 1725).

In Lucy Maud Montgomery's Anne of the Island, Anne moves to Kingsport (Halifax, Nova Scotia) on the mainland and enrols at Redmond (Dalhousie University). She takes lodgings in an apartment that looks out over "Old St. John's Cemetery" – the Old Burying Ground:

They went in by the entrance gates, past the simple, massive, stone arch surmounted by the great lion of England.... They found themselves in a dim, cool, green place where winds were fond of purring. Up and down the long grassy aisles they wandered, reading the quaint, voluminous epitaphs, carved in an age that had more leisure than our own.

The text goes into some depth about the gravestone carvings and styles:

Every citizen of Kingsport feels a thrill of possessive pride in Old St. John’s, for, if he be of any pretensions at all, he has an ancestor buried there, with a queer, crooked slab at his head, or else sprawling protectively over the grave, on which all the main facts of his history are recorded. For the most part no great art or skill was lavished on those old tombstones. The larger number are of roughly chiselled brown or gray native stone, and only in a few cases is there any attempt at ornamentation. Some are adorned with skull and cross-bones, and this grizzly decoration is frequently coupled with a cherub’s head. Many are prostrate and in ruins. Into almost all Time’s tooth has been gnawing, until some inscriptions have been completely effaced, and others can only be deciphered with difficulty. The graveyard is very full and very bowery, for it is surrounded and intersected by rows of elms and willows, beneath whose shade the sleepers must lie very dreamlessly, forever crooned to by the winds and leaves over them, and quite undisturbed by the clamor of traffic just beyond.

All content from Kiddle encyclopedia articles (including the article images and facts) can be freely used under Attribution-ShareAlike license, unless stated otherwise. Cite this article:
Old Burying Ground (Halifax, Nova Scotia) Facts for Kids. Kiddle Encyclopedia.