St. Mary’s Collegiate Church Gowran (Gaelic/Irish: Eaglais Mhuire), also known as the Church of the Blessed Virgin of the Assumption, is a church in the centre of the town of Gowran, County Kilkenny, Ireland. The site is a National Monument in the care of the Gowran Development Association (GDA) and the Office of Public Works (OPW). The church and its family connections have been of huge importance to Gowran and further afield over the centuries. The church is a collegiate church, which means that the priests or chaplains attached to it lived in community together. The present church was not a monastery or an abbey; however experts believe the church was built on the site of an earlier monastery. The presence of an Ogham stone on the site, which is on display in the chancel, suggests there was a place of worship here dating back 2000 years to Celtic times or beyond.

In 1312 A.D. Edmund Butler, Earl of Carrick and Lord Deputy of Ireland made a binding agreement before the Kings Justice in Dublin with the Dean and Chapter of St Canice's Cathedral in Kilkenny to financially support four priests in St. Mary’s Church Gowran to celebrate masses forever, for himself, his wife Joan, his son, James Butler, 1st Earl of Ormonde, his daughters and his ancestors living and dead. 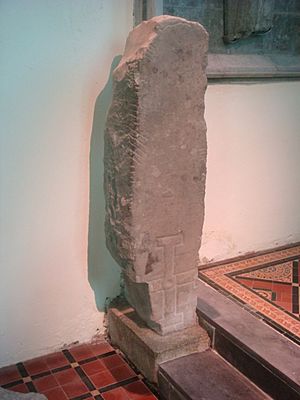 The oldest inscribed monument in the church is the Christianised Ogham Stone from the 3rd or 4th century, which was found on the site during the rebuilding of the chancel in 1826. The Gowran Ogham Stone was used as a building stone in another part of the Church and lay undisturbed for centuries.

The Ogham stones were grave stones or memorials. The one in Gowran is a freestone or grit block: about 1.5 m (60 in) tall, 380 mm (15 in) across the face, and 30 mm (1.2 in) thick. Canon Carrigan gives Fr. Edmund Barry's reading as "DALO MAQA MUCOI MAQUI-ERACIAS MAQI LI", that is, "Dalach, grandson, of Mac-Eirche, who was son of Lia". The stone was Christianised (a Christian cross was carved on the stone) about the 6th century.

Medieval period to the 18th century

The effigy of Ralph (Radoulfus) in his priestly vestments, the portrieve (priest) of Gowran in 1218, is believed to be the oldest burial monument in Ireland with a date on it. The inscription is carved in Latin around the edge of the monument in Lombardic lettering. The monument is dated 19 March 1253.

Gowran was important to the Butlers of Ormond for over 500 years. Following the arrival of the Normans in Ireland in 1169, Gowran and lands surrounding it were granted to Theobald Walter, 1st Chief Butler of Ireland, ancestor of the Butlers. He incorporated the town of Gowran sometime after 1177. He died in 1206. Gowran was the chief seat of the Butlers in Co. Kilkenny until James Butler, 3rd Earl of Ormond, and also called the Earl of Gowran, bought Kilkenny castle in 1391. Gowran and St. Mary’s Church were important to the Butlers from the time of Theobald Fitzwalter and his son Theobald Butler. However it was their descendant Edmund Butler, Earl of Carrick, who established the Collegiate Church in Gowran, who first chose to be buried there. He and his brother Thomas went on a pilgrimage to the Shrine of St. James the Apostle at Santiago de Compostela in Spain in 1321. He died in London on his return on 13 September 1321. He was buried in St. Mary’s Church on 10 November 1321.

Other family names on monuments

Agars - following the presence of the Butlers in Gowran for 500 years, the Cromwellian wars in Ireland, and the Cromwellian campaign in Gowran in 1650, Charles Agar came to Gowran from Yorkshire. Charles, his son James, and many of their descendants are buried in St. Mary’s church and commemorated on various monuments.

Other family names include Kealy, Rothe, and Moran. There are also a memorial stained glass window to the memory of Aubrey Cecil White from Gowran, who was killed in the 1914-18 war in the battle of the Somme on 1 July 1916 aged 20 years, and a monument to James Agar, who died on 30 December 1733.

Single Butler Knight Tomb – This is a mensa or table tomb. The single knight tomb was the first tomb carved in Gowran in the period 1500-1515. This tomb is believed to have been carved by the O Tunneys, the great Kilkenny stonemasons of this period.

The church grounds and gardens are open to visitors year round. The chancel is open to visitors during the months of May, June, July, and August. The Gowran Ogham Stone; the Effigy of Ralph; the effigies of James Butler, first Earl of Ormonde, and his wife, lady Eleanor De Bohun; the Butler Knight Tombs; the Agar Monument; a stained glass window dedicated to Aubrey Cecil White; Toler Aylward windows; and many other artefacts are on display in the chancel.

On 23 August 2014, during Heritage Week, there was a commemoration of World War One, including a talk and presentation on Aubrey Cecil White.

All content from Kiddle encyclopedia articles (including the article images and facts) can be freely used under Attribution-ShareAlike license, unless stated otherwise. Cite this article:
St. Mary's Collegiate Church Gowran Facts for Kids. Kiddle Encyclopedia.