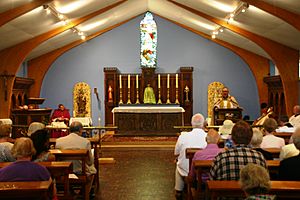 St Anselm's Church is a Roman Catholic church which is part of the Personal Ordinariate of Our Lady of Walsingham in Pembury, Kent, England. It was originally founded in the 1960s as a chapel-of-ease before becoming its own quasi-parish within the personal ordinariate in 2011, following a conversion of a large number of disaffected Anglicans in Royal Tunbridge Wells.

St Anselm's Church was originally constructed in 1964 as the hall/chapel for a new church that would be part of the Catholic Pembury and Paddock Wood Mission. However, the church remained at Paddock Wood until 1978 when Pembury and Paddock Wood became a parish. The planned church in Pembury's presbytery was sold in 1978, leaving Pembury without a Catholic place of worship. A small chapel was added to the hall in 1980 to alleviate this, though it lost its certification as a registered place of worship. Until 2011, it was used as a chapel-of-ease for the Paddock Wood parish.

In 2011, St Anselm's was granted the status of quasi-parish by the Archbishop of Southwark, This came about because it had become a part of the Personal Ordinariate of Our Lady of Walsingham for Anglican converts, allowing former members of the Church of England to break away and join the Catholic church whilst retaining Anglican traditions in the liturgy. The majority of St Anselm's congregation are former Anglicans who had come from the Church of England's St Barnabas' Church, Royal Tunbridge Wells, led by their Anglican vicar who would become the priest of St Anselm's.

For its first three years, the church had few sacred ornaments, relied on a temporary altar on wheels to conduct services, and shared its space with community groups. With funding from parishioners and neighbouring Catholic parishes, a permanent altar, Stations of the Cross, and other church furnishings were installed with a lychgate built outside, allowing the church to be used solely for Christian worship.

All content from Kiddle encyclopedia articles (including the article images and facts) can be freely used under Attribution-ShareAlike license, unless stated otherwise. Cite this article:
St Anselm's Church, Pembury Facts for Kids. Kiddle Encyclopedia.