Paddock Wood is a small town and civil parish in the borough of Tunbridge Wells in Kent, England, about 8 miles (13 km) southwest of Maidstone. At the 2001 Census it had a population of 8,263, falling marginally to 8,253 at the 2011 Census. Paddock Wood is the centre for hop growing. 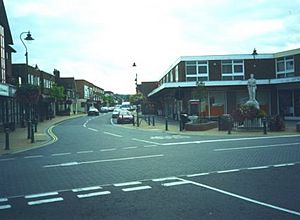 View of Commercial Road facing south west from the station

The commercial areas of Paddock Wood are separated by the railway line.

To the South of the railway lies Commercial Road which runs north east to south west through the town, and is the main shopping street. At the north east end of the street is the entrance to the Railway Station. Commercial Road is home to the branches of several banks, a variety of take-aways, a restaurant and a number of small shops. To the east of Commercial Road, runs Maidstone Road. This road runs north to Beltring and East Peckham, and south to Matfield, and is the main route into and out of the town.

To the north of the railway line lie the industrial areas. Eldon Way Industrial Estate can be found to the east and is home to British Car Auctions, among others. To the west is the larger Transfesa Road and Paddock Wood Distribution Centre. This is the home to a number of companies including Gabriel Chemie UK Ltd, Norman Collett, CoolChain, Mack Multiples, Warburtons and a Whirlpool warehouse, which was destroyed in a large fire in early July 2005.

Mascalls Gallery, a public art gallery opened in 2006 on the site of Mascalls Academy. It has a frequently changing programme of exhibition featuring national and international known artists. These have included Henry Moore, LS Lowry, Graham Sutherland and Lee Miller as well as artists from Latin America, Japan and America. In 2010 Mascalls Gallery exhibited for the first time in the UK drawings by Marc Chagall for nearby Tudeley Church.

Paddock Wood Railway station appears in the novel Dombey and Son by Charles Dickens where, in chapter 55, the character of Mr Carker accidentally falls under a train at the station and is killed.

The town has two schools, Paddock Wood Primary School which was built in 1909, and which has approximately 600 pupils and Mascalls Academy (formerly Mascalls School), (a comprehensive secondary school), which opened in 1956, has around 1400 pupils, and takes its pupils from Brenchley, Matfield, Capel, Five Oak Green, East Peckham, Horsmonden, Lamberhurst and Yalding, as well as Paddock Wood itself.

All content from Kiddle encyclopedia articles (including the article images and facts) can be freely used under Attribution-ShareAlike license, unless stated otherwise. Cite this article:
Paddock Wood Facts for Kids. Kiddle Encyclopedia.