St Edmund's Church, Castleton is a Grade II* listed parish church in the Church of England in Castleton, Derbyshire.

The church dates from the 12th century, and has some 14th-century elements. Alterations were carried out in 1831 when the south porch was built, and the aisles were demolished. A restoration was carried out in 1886 by Hill Brothers of Tideswell.

The tower of St. Edmund's contains a ring of eight bells, with the heaviest six cast in 1802, and two trebles cast in 1812. All bells were cast by James II Harrison, and are unusual for their light weight (11 hundredweight), while being in the key of E-flat. Modern, tuned bells in this key normally weigh in the region of 20 hundredweight. 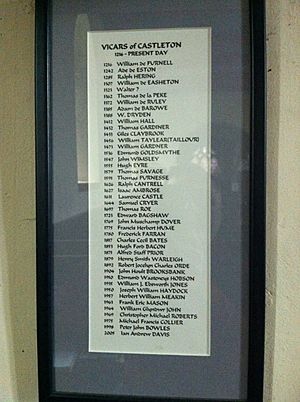 The church contains a pipe organ by Brindley and Foster. A specification of the organ can be found on the National Pipe Organ Register.

All content from Kiddle encyclopedia articles (including the article images and facts) can be freely used under Attribution-ShareAlike license, unless stated otherwise. Cite this article:
St Edmund's Church, Castleton Facts for Kids. Kiddle Encyclopedia.