St James Church in Franz Josef on the West Coast of New Zealand's South Island is a small Anglican church in a garden setting. Built in 1931 in a Tudor style, it is notable for its use of clear glass windows and the view over Waiho Gorge from its altar. This view originally included Franz Josef Glacier, a famous scene recorded on a 1946 Peace Stamp, but the glacier has since receded.

The Ross and South Westland parish was created in 1867, but a church at Franz Josef was not proposed until 1925. Reverend James R. Young (vicar of the parish 1923–1928) suggested a building of riverstone, and a site was donated by Peter and Alec Graham, notable climbing guides and operators of the Franz Josef Glacier Hotel. Plans were drawn up by Maurice Guthrie, but these were rejected as being too expensive for the nine Anglican families of the area. Archdeacon Julius visited Westland in February 1927, and afterwards suggested a wooden church with views of the Waiho River and Franz Josef Glacier. Plans were commissioned from James S. Turnbull and Percy Watts Rule of Timaru in 1928. 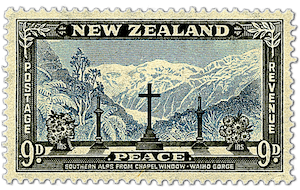 1946 "A Spirit of Thankfulness" Peace Stamp

The dedication ceremony was held on 26 April 1931 by Bishop West-Watson of Christchurch, assisted by Reverends James R. Young (then of Hāwera) and A.K. Warren, vicar of Ross and South Westland, in front of a congregation of 150. The church was dedicated to St James, but named in part to honour James Young, who had proposed it be built, in recognition of his services to the community. 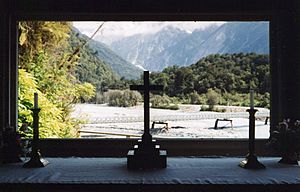 View in 1998 through the central apsidal window of St James Church, looking across the Waiho River with Franz Josef Glacier visible beyond

The church is described as of 'Selwynesque' or Tudor in style. The walls are constructed of board-and-batten, with a corrugated iron roof. There is castellated bell tower. The church is decorated with a highly distinctive style, with dark brown paint used to highlight the exterior battens and roof trusses. Rather than the more usual stained glass windows, the building features three clear plate glass apsidal windows, overlooking the Waiho River. When the church was built it also had a view of the Franz Josef Glacier, but by 1953 this had retreated out of view. From 1985 to 2006, the glacier generally advanced and thickened, and by 1997 it was once again visible through the altar window before retreating again. 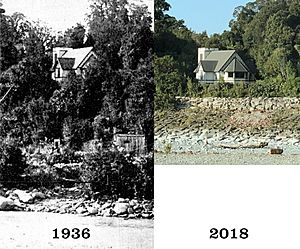 The more famous Church of the Good Shepherd at Lake Tekapo also incorporates clear glass windows to allow for a view of the lake, a feature which was inspired by the prior use at St James.

The church achieved national recognition when the view across the altar to the mountains was featured on a 9d Peace stamp entitled "A Spirit of Thankfulness", issued in 1946 to commemorate the end of World War Two.

On 28 June 1990, the building was registered by the New Zealand Historic Places Trust (now Heritage New Zealand) as a Category I structure, with register number 4994. The building is considered notable for the way in which it complements its bush surroundings, and the use of clear glass windows behind the altar.

In December 1995, 750 mm (30 in) of rain fell over a three-day period, washing away the northern approach to the Waiho River bridge, and gouging out the river bank to within 6 m (20 ft) of St James Church. In September–October 1996, civil works costing $300,000, including a contribution of $50,000 from the Anglican Church Property Trust, were completed to protect both the bridge approaches and the church from future flood events.

All content from Kiddle encyclopedia articles (including the article images and facts) can be freely used under Attribution-ShareAlike license, unless stated otherwise. Cite this article:
St James Church, Franz Josef Facts for Kids. Kiddle Encyclopedia.