St John's Lock is the furthest upstream lock on the River Thames in England. It is situated near the town of Lechlade, Gloucestershire. The name of the lock derives from a priory that was established nearby in 1250, but which no longer exists. The lock was built of stone in 1790 by the Thames Navigation Commission.

The main weir is downstream, just below St John's Bridge, Lechlade, where the River Cole and the River Leach join the Thames on opposite banks.

There is a statue of Old Father Thames outside the lock house. The statue was commissioned in 1854 for The Crystal Palace's grounds. It was later moved to the traditional source of the Thames at Thames Head and then relocated to St John's Lock. The statue sculpted by Raffaelle Monti is Grade II listed.

The need for a pound lock here arose as a result of the opening of the Thames and Severn Canal upstream in November 1789. It was built by J. Nock in 1790 and in its early days complaints were made of tolls being evaded by bullying bargemen. The first lock house was built in 1830, the lock-keeper being required to give up residence at the Trout Inn in accordance with Commission's rule that lock-keepers should not be publicans. The lock was reported to be in a poor state by 1857 and in 1867 was repaired. In 1905 the lock was rebuilt and a new lock-keeper's bungalow built on the other side of the lock.

The lock can be reached easily from St John's Bridge which is about a mile out of Lechlade on the A417 road. 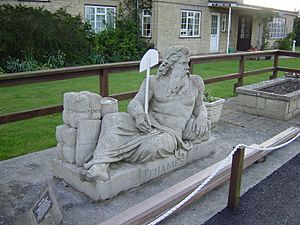 The river winds for three quarters of a mile to Lechlade, where it passes under Halfpenny Bridge (or Ha'penny Bridge), which is so named because it was once a toll bridge. Half a mile after Lechlade there is a connection to the former Thames and Severn Canal, which linked the Thames to the River Severn via the Stroudwater Navigation and the Gloucester and Sharpness Canal. The Thames and Severn Canal is the subject of a restoration plan, and so navigation beyond Lechlade may one day be possible again. The River Coln also joins the Thames at the canal junction, where there is sufficient room to wind a 70 ft narrowboat with care. There are no more locks upstream on the River Thames, with Lechlade normally considered to be the end of the navigable river, but there is a right of navigation as far as Cricklade, and small craft may be able to travel for a further three miles beyond Lechlade when there is plenty of water in the river.

The Thames Path follows the remaining towpath along the southern bank past Lechlade to Inglesham. The towpath extends upstream as far as the connection with the now disused Thames and Severn Canal at Inglesham, one and a half miles upstream. A new permissive path continues alongside the river as far as Upper Inglesham where the path leaves the riverside. The Thames Path next crosses the river at Water Eaton House Bridge, then Eysey Footbridge before arriving at Cricklade. Beyond Inglesham there was no towpath established for navigation, and so if no other riverside right of way exists (or permissive path made), the Thames path diverts away from the river to extend the route to Thames Head. The Thames Path makes significant diversions away from the river (in order going downstream) at Ewen, Ashton Keynes, Cricklade, Castle Eaton and Upper Inglesham.

All content from Kiddle encyclopedia articles (including the article images and facts) can be freely used under Attribution-ShareAlike license, unless stated otherwise. Cite this article:
St John's Lock Facts for Kids. Kiddle Encyclopedia.