Saint Martin (Guernésiais and French Saint Martin; historically Saint-Martin-de-la-Bellouse) is a parish in Guernsey, The Channel Islands. The islands lie in the English Channel between Great Britain and France.

The postal code for street addresses in this parish begins with GY4.

The old Guernésiais nickname for people from Saint Martin is dravans.

In 1883, Pierre-Auguste Renoir spent the summer in Guernsey, with a varied landscape of beaches, cliffs and bays, where he created fifteen paintings in little over a month. Most of these feature Moulin Huet, a bay in Saint Martin. These paintings were the subject of a set of commemorative postage stamps issued by the Bailiwick of Guernsey in 1983.

The parish church of Saint Martin was consecrated on 4 February 1199. At the gate to the churchyard is La Gran'mère du Chimquière, a statue menhir.

St. Martin Parish has entered Britain in Bloom for a number of years, winning the small town category twice, in 2006 and 2011. 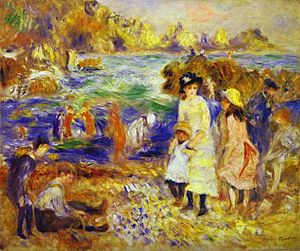 Children on the Beach of Guernsey, 1883, a painting of Petit Port by Pierre-Auguste Renoir

Saint Martin is located in the southeast of Guernsey. The parish borders the Forest on the southwest, Saint Andrew northwest, and Saint Peter Port on the northeast. Saint Martin also has a very small detachment to the west. The detachment is an exclave which is not contiguous with the rest of the parish. The parish itself is made up of four Cantons, these being; Canton des Hamelins, Canton de Hatenez, Canton de Bon Port and Canton de Fermain.

Saint Martin is one of the most expensive parishes in the island for property, with the average four bedroom house costing £615,000.

Relief: Saint Martin is the second highest parish in Guernsey, its elevation is exceeded only by the Forest. The highest areas in the parish are in the central portion, located around Carmel but this gently slopes down to the boundaries, where on the coast, the parish is delineated by steep cliffs.

All content from Kiddle encyclopedia articles (including the article images and facts) can be freely used under Attribution-ShareAlike license, unless stated otherwise. Cite this article:
Saint Martin, Guernsey Facts for Kids. Kiddle Encyclopedia.