Saint Peter Port is the capital of Guernsey as well as the main port. The population in 2001 was 16,488. In Guernésiais and in French, historically the official language of Guernsey, the name of the town and its surrounding parish is St Pierre Port. The "port" distinguishes this parish from Saint Pierre Du Bois.

As well as being a parish, St. Peter Port is a small town consisting mostly of steep narrow streets and steps on the overlooking slopes. It is known that a trading post/town has existed here since before Roman times, the pre-Christian name of which has not survived into the modern era.

The postal code for addresses in this parish starts with GY1.

People from St. Peter Port, were nicknamed "les Villais" (the townspeople) or "cllichards" in Guernésiais.

St. Peter Port is located on the east coast of Guernsey. It borders St. Sampson in the north, The Vale in the north-west, St. Andrew in the west and St. Martin in the south.

Relief The land in the north and by the harbour is low lying but in the south, the land gets much higher (but not as high as St Martin's or the Forest). This means that there are quite a few cliffs on the coast between Havelet and Fermain. 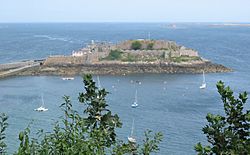 In addition, the islands of Herm and Jethou belong to the parish, but are not part of any canton. They belong to Electoral district Saint Peter Port South.

Candie Gardens, an award-winning restored Victorian Garden features a statue of Victor Hugo. Cambridge Park is a recreational park that includes a skate park. In 2014 the parish was a Gold & Category Winner in the RHS Britain in Bloom competition, followed in 2016 with another Gold medal.

All content from Kiddle encyclopedia articles (including the article images and facts) can be freely used under Attribution-ShareAlike license, unless stated otherwise. Cite this article:
Saint Peter Port Facts for Kids. Kiddle Encyclopedia.