Fort George is situated in Saint Peter Port, Guernsey, and was built to become the main island military headquarters and to protect barracks to house the island garrison for the British Army, in place of Castle Cornet.

Planned during the Anglo-French War (1778–83), construction started in 1780 and was completed in 1812. It was built to accommodate the increase in the number of troops stationed in the island to deter the anticipated French invasion, such as the attempted Jersey one in 1779 and the one that resulted in French troops landing in Jersey in January 1781, which resulted in the Battle of Jersey in the centre of Saint Helier. 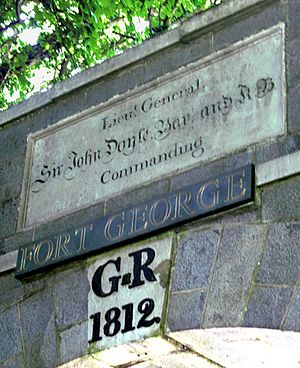 Plaques over the entrance of Fort George

The area occupied by the fort was excellent corn fields but with one and a half regiments moved into the island as defence following the start of the American Revolutionary War, were used by the military before the construction of the current fort. In 1775/6 an epidemic amongst highland soldiers stationed at the fort area decimated the unit and the disease spread to civilians in neighbouring parishes. The old fort was in poor state and General Charles Grey, 1st Earl Grey, Governor of Guernsey from 1797 to 1807 was having difficulty persuading the island to improve its defences. In 1798 in frustration, he ordered the part built fort to be demolished so as not to give potential invaders a safe haven, it was not destroyed and construction work continued.

The design was that of a Star fort with a bastioned trace. A detached redoubt, Fort Irwin was linked to the fort. To seaward the Clarence Battery was constructed.

On 27 March 1783 there was a mutiny in Guernsey by 500 regular soldiers, mainly Irish soldiers in the recently created 104th Regiment, who were in winter quarters in Fort George, caused possibly by some discharged men from the recently disbanded 83rd Regiment who had just been sent to join the 104th on the island. The soldiers demanded that the fort gates be left open so they could come and go as they pleased, however whilst this was agreed, the soldiers inside the fort a few days later fired at their officers, forcing them to withdraw from the fort. Both the 18th Regiment (the Royal Irish) and the Guernsey Militia turned out with 6 pieces of artillery. Volleys of shots were fired by the rebels, but when the militia outflanking the rebels, they surrendered. The Government of Guernsey gave a public thanks to the 18th Regiment and militiamen, awarding them 100 guineas. Two men were wounded, 36 ringleaders arrested and the 104th Regiment was disbanded. 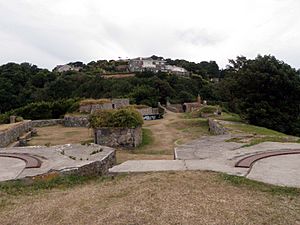 View of Fort George from the preserved Clarence Battery. Luxury housing, some of which is visible above the battery, has replaced most of the old fort.

From 1794 to 1819 a Company from an invalid battalion of the Royal Artillery was based at Fort George. Duelling was not permitted in Guernsey, however they took place, the most famous recorded being between two officers based at the fort in 1795, fought at L'Hyvreuse Avenue, St Peter Port, where Major Byng of the 92nd Regiment died after challenging the Regimental Surgeon over a matter of Honour for not standing for the National Anthem.

Before the barracks were built in the fort, islanders were required to provide accommodation for soldiers that could not be accommodated in Castle Cornet. Each Parish had its quota and if they were quartered in public houses or private dwellings, the parish authorities were liable for the cost.

Sir John Doyle was appointed Lieutenant Governor of Guernsey in 1803 and commander of all forces in Guernsey. After declaring a "state of emergency" in 1804, he undertook many works to improve the defence of the Island, including the draining of the Braye du Valle, improving some roads to military standard and building forts and batteries around the coast. The building of Fort George progressed more rapidly with Lt. Col. John Mackelcan (allegedly the illegitimate son of George III and Hannah Lightfoot) promoted to Commander of the Royal Engineers at the fort in 1803. The fort was completed in 1812.

Families of the soldiers stationed in the fort normally lodged in St Peter Port. In 1832 J. M. W. Turner sketched the fort.

The Royal Guernsey Light Infantry trained at Fort George before the 1st Battalion sailed on 1 June 1917, on their way to the Western Front. The 2nd Battalion remaining at the fort as a training battalion.

During the Second World War the fort was occupied by German forces who gave it the name Stützpunkt Georgefest who constructed a number of emplacements and a German Luftwaffe radar early warning station with 2 x Freya and 2 x Giant FuMG 65 Würzburg-Riese. Attempts by Allied aircraft to destroy the radar station before the Normandy landings in June 1944 were ineffective with allied aircraft shot down on 2 and 5 June. Unexploded bombs occasionally surface.

The States of Guernsey bought the land from the British Crown in 1958. In 1967, the land was sold to a developer, Fort George Developments, with the aim of building 120 luxury houses amongst the stronger of the military buildings, the main barrack buildings being demolished. Objections to the planned building work were rejected despite 21% of the population signing a petition against the works.

The main entrance is through an imposing gateway that still houses the original wooden gates. Behind the gate would have been a moat and drawbridge which would have provided a second line of defence.

A plaque over the gate is addressed to Maj-Gen. Sir John Doyle Bt, GCB, KC, Lieutenant Governor of Guernsey from 1803 to 1816 and Commanding Officer in 1812.

The 7,000sq ft Governor's house, Belvedere House lies at the lower end of a field that provided the parade ground for the fort. It was sold by the States of Guernsey in 2008 and has become a private dwelling. 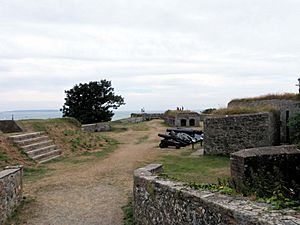 Barracks were built, both for the Artillery at Belvedere and Infantry, capable of housing 3,000, arranged in a square, together with an armoury, infantry hospital and water storage tank. A signal station with warning cannon. Royal Engineer office next to the main gate. A number of tunnels exist under the fort, some of which have collapsed.

In 1833 the fort mounted 34 cannon, one carronade and four mortars. Support came from several nearby strong batteries. The armoury contained pikes, muskets and swords.

Originally called Terres Point Battery when it was built in 1780, it was renamed in 1815 in honour of the third son, Prince William, Duke of Clarence of King George III. Ten gun mountings allowed the battery to fire in two directions, a magazine and Guard Room were also built. The original guns were later upgraded to 5-inch guns and during the occupation a 3.7cm flak gun was installed.

A military cemetery was created and housing graves of British soldiers and sailors from the 19th and 20th-centuries. It is also the final resting places of 111 German soldiers and sailors. The cemetery is War Department property and contains war graves of both world wars. The Commonwealth War Graves Commission lists all 136 military graves in the cemetery, irrespective of nationality.

A register of Baptisms and Burials was maintained by the Garrison Chaplain at Fort George between 1794 and 1810 and is held in the island archives.

Access to the site is possible although much of the land is now in private hands. The majority of the minor buildings were demolished and the remainder have been incorporated into houses. The original main gate is complete and provides vehicle access to the estate. There are car parks at the bottom of Belvedere field and the cemetery.

From the Valette bathing places, one can walk along to the aquarium, which is built inside a tunnel under the fort, and climb the steps up to the Clarence battery, from where one can access the fort and the cemetery.

The main road leading from St Peter Port to the fort is Le Val des Terres which was opened in 1935 by Le Prince de Galles. Prior to that the approach was via George Road.

All content from Kiddle encyclopedia articles (including the article images and facts) can be freely used under Attribution-ShareAlike license, unless stated otherwise. Cite this article:
Fort George, Guernsey Facts for Kids. Kiddle Encyclopedia.