Castel (Guernésiais: Lé Casté; French: Sainte-Marie-du-Câtel) is the largest parish in Guernsey in terms of area.

The Parish has clear evidence of changes in ancient sea-levels, with trunks of an oak forest visible on Vazon beach at very low tide and at 8m above sea level an ancient beach.

The old Guernésiais nickname for people from Castel was ânes pur sàng.

The parish plays host to both Le Viaër Marchi and the North Show which includes the Battle of Flowers annually. It also produces a regular magazine called Castel Matters.

The postal code for street addresses in this parish begins with GY5. 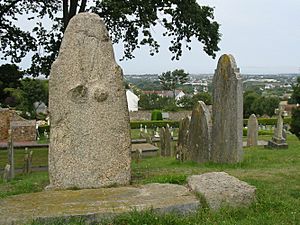 The parish church of St Marie de Castel, also known as Notre Dame de la Délivrance, was consecrated on 25 August 1203. It is notable for its preserved medieval fresco.

A pre-Christian neolithic menhir dating from 2,500-1,800 BC is in the churchyard. It was discovered under the floor of the church in 1878, possibly buried there to rid the church of a link to the older pagan beliefs.

In the churchyard is the tomb of James Saumarez, 1st Baron de Saumarez GCB, an admiral of the British Royal Navy,

The church is thought to be built on an ancient fort, hence the name Castel or Catêl, possibly a corruption of the Roman Castellum or castrum. In the area broken Roman roof tiles and pottery have been discovered, indicating Roman occupation.

All content from Kiddle encyclopedia articles (including the article images and facts) can be freely used under Attribution-ShareAlike license, unless stated otherwise. Cite this article:
Castel, Guernsey Facts for Kids. Kiddle Encyclopedia.