The majority of St Mary's is in the southern portion, to the east of St Mary Street. This is where St Mary's church is located, from which the suburb's name originates. The southern section is also home to the Golden Grove area. It is bordered on the east by the rail lines (the other side of these lines is the district of Chapel). It gives its name to St Mary's Stadium, where Southampton Football Club play, although the stadium itself is in the neighbouring suburb of Northam. 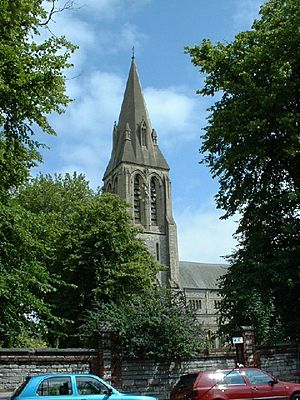 St Mary's Church serves many Christians in the area including many West African people. On the first Sunday evening of each month there is a Taizé style service. The church has peels of bells which ring on monday nights, which inspired the writing of the song The bells of St. Mary's later sung by Bing Crosby.

The football club now known as Southampton Football Club were founded at St Mary's Church, on 21 November 1885 by members of the St Mary's Church of England Young Men's Association. The club was originally known as St. Mary's Young Men's Association F.C. (usually abbreviated to "St. Mary's Y.M.A.") and then became simply St. Mary's F.C. in 1887–88, before adopting the name Southampton St. Mary's when the club joined the Southern League in 1894. After winning the Southern League title in 1896–97, the club became a limited company and was renamed Southampton F.C. 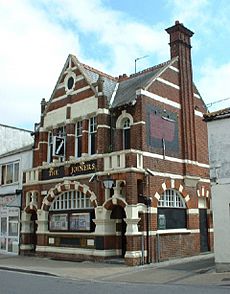 The area is home to the Joiners Arms at 141 St Mary's Street, one of Southampton's main music venues and nationally famous for hosting acts such as Oasis, Coldplay and Muse. In June 2013 it was named Britain's Best Small Venue by NME.

There are two radio stations that broadcast from St Mary's, 103.9 Voice FM provides an eclectic mix of programming. Unity 101 is a community radio catering to the Asian and ethnic minority communities.

All content from Kiddle encyclopedia articles (including the article images and facts) can be freely used under Attribution-ShareAlike license, unless stated otherwise. Cite this article:
St Mary's, Southampton Facts for Kids. Kiddle Encyclopedia.