St Mary's Church is in Ambleside, Cumbria, England. It was built in the 1850s to a design by George Gilbert Scott in Gothic Revival style (specifically Decorated Gothic). The building is Grade II* listed. Notable features include its stone spire, which is a local landmark and an unusual feature in Lake District churches.

The building is constructed of slate, the typical building stone of the locality, and sandstone which is used for dressings and the spire.

The decision to build the church reflects the coming of the railway to Windermere in 1847 and the subsequent expansion of Ambleside because of the increased opportunities for tourism.

A north-east choir vestry was added in 1889 to the designs of Paley & Austin of Lancaster.

There is a 26-foot mural on the west wall depicting rushbearing (a traditional ceremony in Ambleside which is held on the first Saturday in July). The mural was created by Gordon Ransom of the Royal College of Art when the College was evacuated to Ambleside during the Second World War. The vicar of Ambleside, Henry Adamson Thompson, is depicted on the right hand side of the mural. 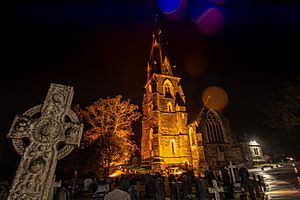 Burials include Mary Louisa Armitt, the founder of Ambleside's Armitt Library. Her sisters Annie and Sophia are also buried there.

All content from Kiddle encyclopedia articles (including the article images and facts) can be freely used under Attribution-ShareAlike license, unless stated otherwise. Cite this article:
St Mary's Church, Ambleside Facts for Kids. Kiddle Encyclopedia.