There has been a church on the site since the Norman Conquest. The Domesday Book mentions the presence of a priest at Ware, and the existence of a church is confirmed by a reference in another document from the reign of William the Conqueror, a charter given to Hugh de Grandmesnil. 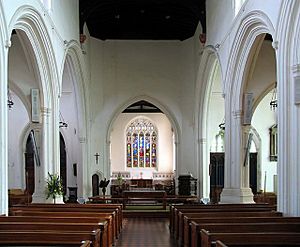 The chancel, the oldest part of the present building, dates from the thirteenth century, when the church served the town and the monks of the Benedictine priory.

The church was restored in the nineteenth century by George Godwin.

The building is faced in flint.

The tower is surmounted by a short spire of the type known as a "Hertfordshire spike" (see note).

People connected with the church

All content from Kiddle encyclopedia articles (including the article images and facts) can be freely used under Attribution-ShareAlike license, unless stated otherwise. Cite this article:
St Mary's Church, Ware Facts for Kids. Kiddle Encyclopedia.