St Mary le Port is a ruined parish church in the centre of Bristol, England, situated in the area known as Castle Park.

St Mary le Port is said to have been founded in Saxon times after Anglo-Saxon foundations were found during archaeological excavations and Saxon pottery was found nearby. The church was rebuilt and enlarged between the 11th and 16th centuries.

During the 19th and early 20th centuries the church was a very popular centre of evangelical, Protestant, and Calvinist teaching within Anglicanism. 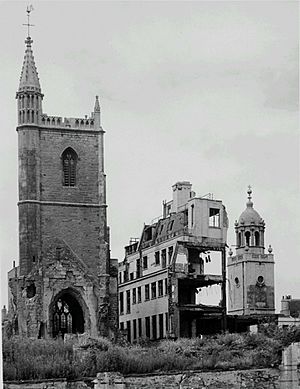 Photograph, c.1940, showing the remains of the church from the south east, following the Bristol Blitz bombing raid. Other bombed buildings and the tower of All Saints' Church are also visible.

The church was bombed in the Second World War on 24 November 1940 during the Bristol Blitz. John Piper painted an evocative picture of the bombed St Mary le Port. This image appears on the 1/6 British commemorative stamp, part of a set of four paintings by British artists issued in 1968. All that remains of the church is the 15th century tower, a Grade II listed building, and a Scheduled Ancient Monument which during the latter years of the 20th century was surrounded by the buildings of Norwich Union and the Bank of England.

Although many of the parish records of St Mary le Port church were destroyed when the church was bombed, some archive material is held at Bristol Archives (Refs. P. StMP) (online catalogue) and P.St JB/MLP (online catalogue) including copies of baptism, marriage and burial registers. The archive also includes records of the incumbent, churchwardens, parochial church council, charities and schools, plus deeds.

The church's clergy have included:

All content from Kiddle encyclopedia articles (including the article images and facts) can be freely used under Attribution-ShareAlike license, unless stated otherwise. Cite this article:
St Mary le Port Church, Bristol Facts for Kids. Kiddle Encyclopedia.