The Church of St Mary the Virgin, Iffley is a Church of England parish church in the village of Iffley, Oxfordshire, England, now absorbed as a suburb of the city of Oxford. 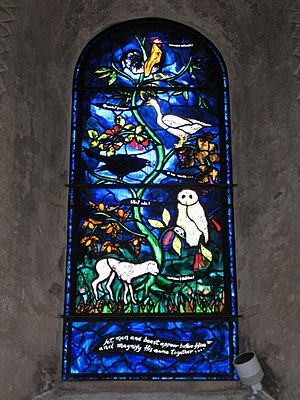 The Romanesque church was built c.1160 by the St Remy family, probably financed with funds from the de Clintons of Kenilworth Castle. The Early Gothic east end was extended in c.1230, when a cell was constructed on the south side for the anchoress Annora.

The building has not been changed much over the centuries, retaining its round-arched windows and doorways. It is Grade I listed. The church includes a stained glass window by the 20th-century artist John Piper and another by Roger Wagner.

All content from Kiddle encyclopedia articles (including the article images and facts) can be freely used under Attribution-ShareAlike license, unless stated otherwise. Cite this article:
St Mary the Virgin, Iffley Facts for Kids. Kiddle Encyclopedia.