St Oswald's Church, Askrigg is a Grade I listed parish church in the Church of England in Askrigg, North Yorkshire. 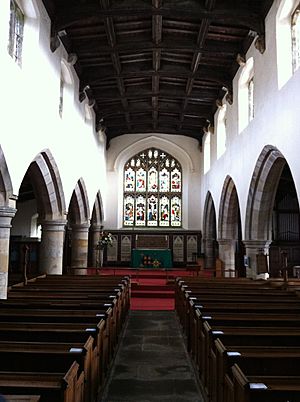 The church dates largely from the 15th century, but there is some earlier work. It is of stone construction in the Perpendicular style, consisting of 5 bay chancel and nave, aisles, south porch and an embattled western tower with pinnacles containing a clock and six bells.

By the mid nineteenth century, the foundations of the nave piers had given way, so the church was restored between 1852 and 1854 at a cost of £1,500. The body and north aisle of the church were rebuilt. The roof of the nave which dated from the 15th century was repaired. A western gallery which blocked up the tower was removed, and a staircase giving better access to the tower was inserted. It reopened for worship by Charles Longley, Bishop of Ripon, on 31 October 1854. 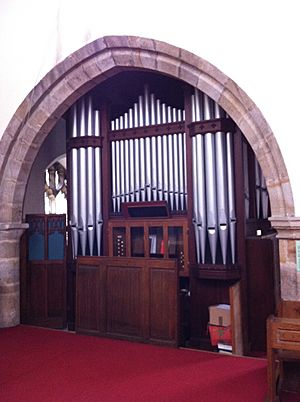 The church has two manual pipe organ dating from 1869 by Forster and Andrews. A specification of the organ can be found on the National Pipe Organ Register.

All content from Kiddle encyclopedia articles (including the article images and facts) can be freely used under Attribution-ShareAlike license, unless stated otherwise. Cite this article:
St Oswald's Church, Askrigg Facts for Kids. Kiddle Encyclopedia.