St Peter and St Paul's Church, Shelford is a parish church in the Church of England in Shelford, Nottinghamshire.

The church is Grade II* listed by the Department for Digital, Culture, Media and Sport.

The church is of medieval style and era but was heavily restored between 1876 and 1878 by Ewan Christian. The tower of the church was used by then Royalists during the siege of Shelford Manor during the English Civil War, but they were eventually defeated out by Parliamentarian forces.

It is now part of the united parish of St Mary's Church, Radcliffe on Trent.

There is stained glass in the chancel by Charles Eamer Kempe and in the north aisle by Alexander Gascoyne.

The earliest mentions of organs is from 1835 when one is recorded in the churchwardens accounts. A new organ was purchased in 1855 from Henry Bevington of London. This was kept until the end of the 20th century. The current organ was acquired from St Catharine's Church, Nottingham in 2003. It was installed in the church by Henry Groves & Son in 2004.

An early clock was installed in 1680 by Richard Roe. This was replaced in 1880 by a new clock mechanism by G. & F. Cope of Nottingham. 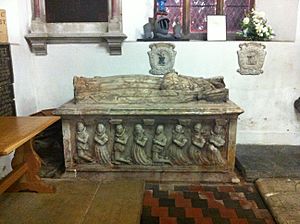 All content from Kiddle encyclopedia articles (including the article images and facts) can be freely used under Attribution-ShareAlike license, unless stated otherwise. Cite this article:
St Peter and St Paul's Church, Shelford Facts for Kids. Kiddle Encyclopedia.