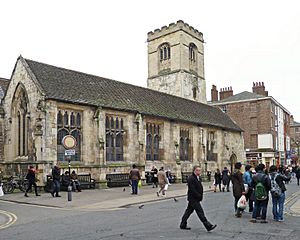 The church, seen from Church Street

The church lies across the line of the wall of Roman Eboracum, and the first church on the site was probably built before the Norman Conquest, as a fragment of an early 11th-century cross has been found in the wall of a house on Newgate, within the former churchyard. Foundations of a Norman wall have also been discovered underneath the present church. The church was first recorded in the 1154, and from 1394 the advowson belonged to the Vicars Choral of York Minster. It is dedicated to Saint Sampson of York, the only church in England with this dedication. 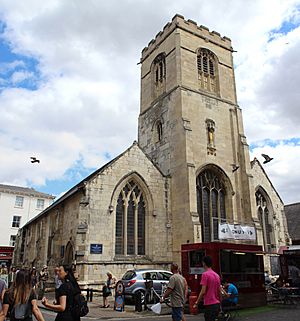 The church was gradually rebuilt in the 15th-century, the south aisle being rebuilt in the 1400s, and the north aisle dating in the 1440s, while the west tower was rebuilt in the 1480s. In the 1549, there was a plan to merge the parish with that of St Helen, Stonegate, and although this did not happen, St Sampson did gain two bell from St Helen. In 1644, the tower was damaged during the English Civil War, and the Parliamentarian troops subsequently destroyed most of the monuments in the church.

Between 1845 and 1848, most of the church was rebuilt by Frederick Bell, and a vestry was added. The tower survived, but was reduced in height, being heightened again in 1910. Other pre-Victorian elements of the church include the east window of the north aisle, some roof bosses, the bell-frame and bells, the north and south doors, the piscina, and various monuments. In 1969, the church closed, and many of its fittings were removed. However, it was restored by George Pace, and in 1974 it reopened as a centre for the elderly. He inserted a mezzanine floor over the north aisle, to give space for offices, and placed a kitchen in the south aisle. The sanctuary was converted into a chapel, with a reredos from All Saints, Falsgrove.

The church was listed as Grade II in June 1954.

All content from Kiddle encyclopedia articles (including the article images and facts) can be freely used under Attribution-ShareAlike license, unless stated otherwise. Cite this article:
St Sampson's Church, York Facts for Kids. Kiddle Encyclopedia.