Kids Encyclopedia Facts
This page is about the chocolate bar. For the astronomical term, see galactic bar.

A Starbar split in half

Starbar is a brand of chocolate bar manufactured by Cadbury. The bar has a chocolate covering and is filled with caramel and crushed roasted peanuts. The product is also sold in Canada and Germany under the name Wunderbar.

Initially popular in the mid-1970s, it was promoted as "the munchiest bar ever" and in 1985 it briefly became "Peanut Boost", only to return to Starbar as popularity of the Boost bar waned. It was promoted in the UK in the mid-1980s with a postal offer (3 wrappers plus P+P got you a Starbar Ruler, Pencil and a copy of Douglas Adams' "The Restaurant at the End of the Universe"). 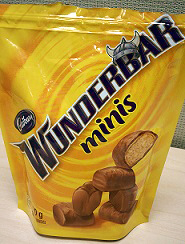 Canadian and German version of the Starbar, branded "Wunderbar" in a package of mini bite-size pieces

In Canada and Germany, Wunderbar is a Cadbury Adams product marketed under licence of Cadbury UK Limited. It is also available in a package of "minis" and in a 12 g size for Halloween.

Since January 2012, Starbars have been available in the Nordic countries, manufactured by Marabou Sweden (owned by Mondelēz International (who also owns Cadbury).

Starbar was introduced to Australia in November 2012 (made in Ireland); however, it is no longer available and no longer listed on the Cadbury Australia website.

All content from Kiddle encyclopedia articles (including the article images and facts) can be freely used under Attribution-ShareAlike license, unless stated otherwise. Cite this article:
Starbar Facts for Kids. Kiddle Encyclopedia.